25 migrants, abandoned in the Niger desert by smuggler, rescued 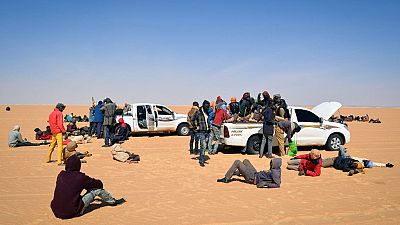 A group of migrants, mainly from Niger and Nigeria, rest next to pickup vehicles on January 22, 2019, in northern Niger.   -

Twenty-five Niger migrants, including women and children, abandoned by their driver, were rescued last week in the middle of the desert in northern Niger, the International Organization for Migration (IOM) announced Tuesday.

The migrants were rescued "last weekend in the Sahara desert by (teams of) IOM and the Directorate of Civil Protection of Niger," said the UN agency in a Facebook post.

The survivors, whose destination was not specified, "remained without food and water for three days" before being found, said the IOM.

Rescue operations for migrants are frequent in the hostile Nigerian desert, mainly in areas close to Libya.

Many West African migrants try to cross through Libya to reach the Mediterranean coast and thus reach Europe.

They usually gather in Agadez, the large city in northern Niger, where there are networks of smugglers and "ghettos" (backyards) in which they are housed before crossing the desert. According to authorities in Agadez, vehicles carrying migrants often break down in the desert or smugglers get lost, abandoning their passengers for fear of checkpoints or military patrols. Some migrants die of dehydration.

In April 2020, in the midst of the Covid-19 pandemic, more than 250 stranded West African migrants were found near Madama, on Niger's border with Libya, abandoned by their smugglers, according to the IOM.

In an effort to discourage smugglers, Niamey passed a law in 2015 making migrant smuggling a crime, punishable by up to 30 years in prison. However, despite this measure, migrants are taking "new and more dangerous routes" to enter Libya, according to a security source. 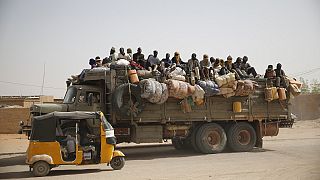