5 Easy Steps to Get Your Digital Vaccine Certificate in SA

That means that fully vaccinated South Africans can now use the website to obtain their digital vaccine certificate. The certificate authenticates that users have been fully inoculated against COVID-19.

While the government says that it will not force anyone to get vaccinated or use the vaccine certificates to ‘oppress’ people, certain third-party establishments and organisations will begin to require the certificates for access.

For example, this year’s Rage Matric festival in KwaZulu-Natal will only allow partiers who have been vaccinated – ie. requiring the vaccine certificate. The certificates can also be used for traveling to certain countries, like the UK where proof of vaccination will mean the difference of either having to quarantine upon arrival for two weeks or not.

The launch of the digital certificates has been controversial in SA, with many detractors and anti-vaxers comparing the certificates to the apartheid-era Pass Laws Act of 1952, which prohibited black South Africans from accessing certain areas without ID passes known as “dompas” – ‘dumb pass’ or ‘domestic passport’ – under pain of strict consequences.

The only requirements for receiving a digital vaccine certificate are to be fully vaccinated and to have at hand your vaccine code number that you were sent via SMS after your inoculation. The entire process is relatively easy and users should be done in a few minutes.

Here are 5 easy steps to getting your digital vaccine certificate: 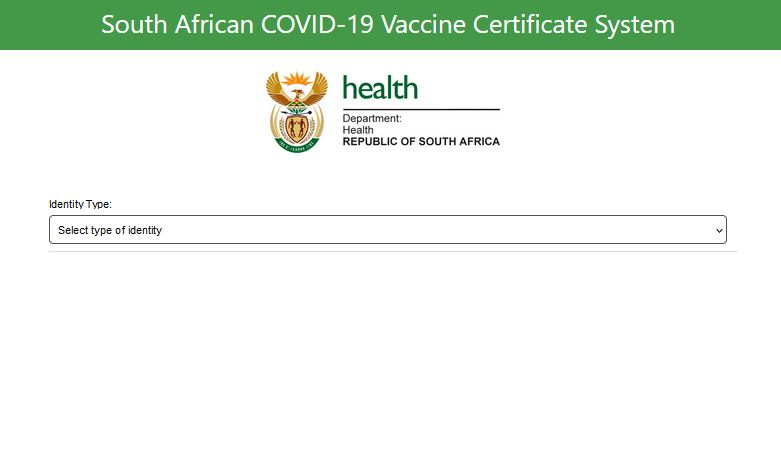 The first thing you will need to do is navigate to South African COVID-19 Vaccine Certificate System (health.gov.za) and select “get my vaccine certificate.”

Then choose which identity document you wish to sign in with. Your choices are: RSA Identity Number, Passport Number, or Asylum Seeker/Refugee Number.

This guide will follow using an RSA identity number as it will be the most common choice. Selecting this option will take you to step 2. 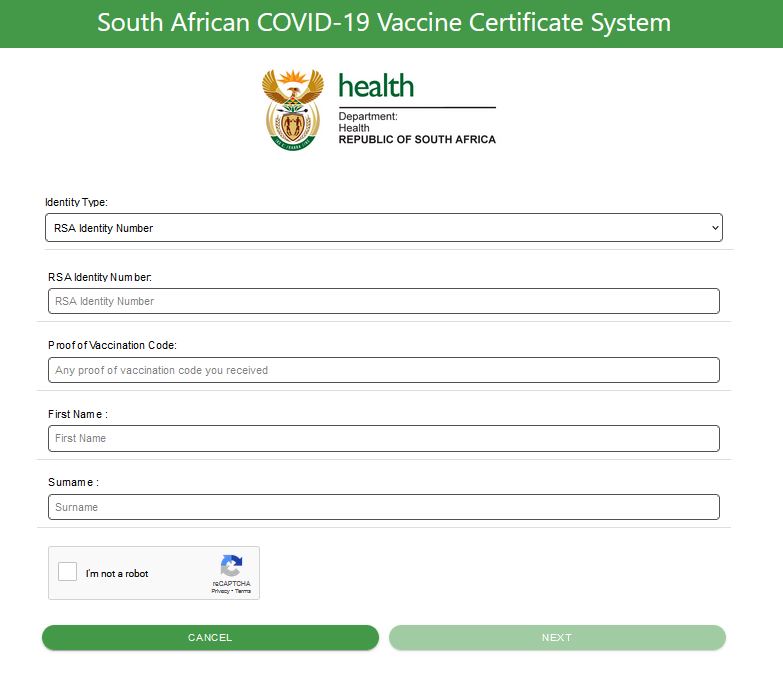 Once RSA identity number is selected, a few other fields will open up like in the image above. Fill in your ID number and your proof of vaccination code that you received after you went to get your last vaccine.

This code was sent via an SMS message confirming you received the respective vaccine. Type it in exactly as you received it. Any vaccination code can be used, the website says, so if you received two vaccines, use any of the codes received.

Finally, type in your name and surname as they appear in the SMS sent with the code. Confirm you aren’t a malicious online robot by clicking in the reCAPTCHA box and click the “next” button once it becomes dark green.

You will now need to confirm the number that the SMSs were sent to, as shown above. Once you input your cellphone number and click next, you will be taken to the fourth step.

If you put in the correct phone number, the system will now send you an OTP (one-time pin), which you just need to input in the field provided and select ‘next’.

After you input the OTP, users will be sent to a page that contains a JPG image of their certificate. Here users should select “download PDF” on the top right of the screen.

Finally, after the PDF is downloaded you will have your digital vaccine certificate. The information on the certificate is private, and even the QR code can be reversed very easily to reveal personal information about you. Keep your certificate private, and only reveal it for its intended purpose of access and travel.

Users should not share their certificates on social media to avoid being defrauded or having their personal details leaked.

Digital Transformation in South Africa – The Future is Bright for Heal...

5 Ways IT Companies Can Grow in Africa