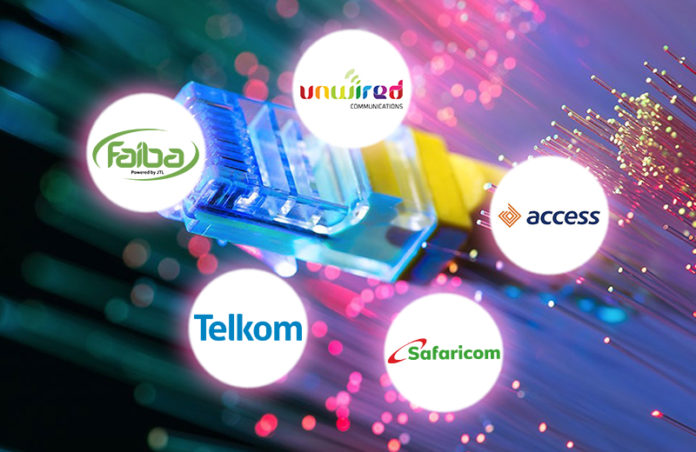 The analysis only takes into account top providers of internet services in the country, ones which account for 3% or more of total test samples in the market in Q2 of 2021 – smaller providers are not tested.

First established in 1995 as Commsol, later renamed AccessKenya in 2000. The firm is one of the country’s leading corporate ISPs with headquarters in Nairobi.

AccessKenya offers FTTB (Fibre-to-the-Business) options with speeds from 512Kbps at price on request in both monthly and yearly plans.

An ISP based in Nairobi and founded in 2008. Unwired Communications is the leanest and youngest of Kenya’s top ISPs, with only about 25 regular employees.

The company provides cost-effective data services to both residences and businesses in Kenya through broadband internet, virtual private networks (VPNs) and even structured cabling solutions.

Their customer base is mostly wholesalers at 80%, with the remaining 20% being private residences. Unwired’s services can range from 1Mbps wireless from at little as Ksh50, up to 6Gbps lines. Its packages are flexible and customer-depending.

Established in Kenya in 1999, Telkom was one of the country’s first telecommunications providers. The semi-private company is 60% owned by Helios Investment partners with the rest of the shared owned by the Government of Kenya.

Internet plans for private residences start at 5GB cap daily data for Ksh250, up to 100GB for 90 days at Ksh6000. Telkom Kenya’s 4G download speeds are around 53Mbps.

Telkom ranked 3rd for both connection consistency and latency.

Founded in 1993, Safaricom provides a large bouquet of services and solutions, from M-Pesa to mobile devices and all in-between.

Its home fibre packages start at Ksh2999 pm for 8Mbps, to Ksh13,549 pm for 100Mbps in its Diamond Plus fibre package that includes 5G mobile data as well.

The fastest ISP in Kenya by a significant amount, according to Ookla’s Speed Score.

Faiba also has the most consistent connection by a wide margin and has the second least latency out of the other top Kenyan ISPs.