"This is something special - this victory is historic," he said.

"When we open the history books in the next couple of years, it will be all these players who will be inside."

Their surprise victory over the Black Stars in their Group C clash on Tuesday, celebrated loudly with centre-back Kassim M'Dahoma filmed dancing on a table, provided a first-ever Nations Cup win for a country which has enjoyed a remarkable footballing rise.

Comoros, rated 132nd in the world, are the third lowest-ranked side of the 24 teams in Cameroon for the Nations Cup, and the former French colony only joined world governing body Fifa in 2005.

Nonetheless, their shock win has their coach dreaming of another major upset - reaching a first ever World Cup - which could become easier when the tournament expands to 48 teams from 2026 onwards.

"I believe it's possible that this team can have a World Cup qualification," Amir Abdou said after the game.

A nation of less than one million inhabitants spread across an archipelago in the Indian Ocean, the Comoros had to wait until 2016 for their first qualifying win, at the 20th attempt, when beating Botswana in a Nations Cup tie.

On Tuesday night in the northern Cameroonian city of Garoua, a team nicknamed after a rare fish - the Coelacanthes - found near the islands' coastline claimed their biggest scalp, against a nation of 25 million.

They took an early lead through El Fardou Ben Nabouhane, their biggest name in that he plays for former European champions Red Star Belgrade, against a side featuring Arsenal's Thomas Partey, Crystal Palace's Jordan Ayew and Leicester's Daniel Amartey.

They then further benefitted as Ghana captain Andre Ayew was shown a straight red card for a foul on the goalkeeper Salim Ben Boina.

Comoros went 2-0 up in the second half only for the Black Stars to draw level before Mogni struck an 85th-minute winner to spark incredulity and delirium across the Comoros.

"I know that the whole country partied. the whole population was celebrating last night until this morning," said Comoran journalist Elie Djouma, who is following the team in Cameroon.

"Lots of journalists didn't go to work because they went to bed too late. You know, Comoros is a country where football is becoming more and more of a crazy thing. No matter when the team returns home, they'll be well received."

Ghana's defeat meant that a team which has been to three World Cups and reached the semi-finals at six of the last eight Nations Cup exits in the group stage for the first time since 2006.

"It's very important for me and for my team because we showed that we have the quality to compete with the big nations in Africa," said 30-year-old midfielder Mogni.

"Also this victory is very important for us because we continue to believe and hope that we can pass this group stage for next round."

The Comoros are hoping their three points will be enough to take them through as one of the four best third-placed sides, but their hopes hang by a thread with three groups still to be decided.

"What we have done is already historic, brilliant," Said Ali Athoumane, president of the Comoros Football Federation, told reporters.

"We were a little more liberated, more relaxed. We had nothing to lose, and now we have to hold onto hope because mathematically, it is still possible."

Despite losing both their opening games, against Gabon and Morocco respectively, Comoros impressed in all three of their Group C games.

Their rise has often been credited to the appointment of coach Abdou in 2014 whose insistence on bringing in players from the diaspora to play for the team has revolutionised their fortunes.

"When I took the team, I believed that this team definitely had talent," he said. "It takes time of course, it's a process but I believe this team had a future."

"I think I was the only professional when I arrived in 2010," the 37-year-old squad captain explained.

"We were five or six expatriates at the time. It's clear that we started from the bottom but year after year, with the addition of other professionals, the whole organisation became more professional." 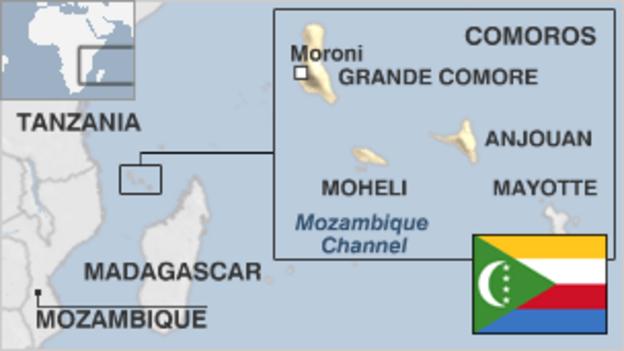 Their success in Cameroon so far will ensure that more and more expatriates will be keen to join a side which draws many players from France and whose fortunes are on the rise.

Meanwhile, the team's devoted fans - many of whom stop work or school to watch games - are hoping that their coach can continue his incredible work.

"We hope that Amir Abdou will continue to take on the big African and international nations because we Comorans love football," said Naima, a fan based in the capital Moroni.

"We may be a small nation but we can go far and make history in football."

Madagascar 2-0 Nigeria (2019) - The debutants from the Indian Ocean island, ranked 63 places below the three-time winners, scored a goal in either half to top Group B ahead of the Super Eagles in Egypt.

Algeria 0-1 Equatorial Guinea (2022) - Defending champions in Cameroon, Algeria saw their 35-match unbeaten run come to an end against Equatorial Guinea, who are 85 places below the Desert Foxes in the world rankings and qualified for the tournament by right for the first time.

Zambia 0-0 Ivory Coast (8-7 pens) (2012) - Zambia completed a fairytale run in Gabon and Equatorial Guinea to lift their first-ever Nations Cup, beating an Ivory Coast side containing the Toure brothers, Gervinho, Salomon Kalou and Didier Drogba in the final after a dramatic penalty shoot-out.

Malawi 3-0 Algeria (2010) - The Flames, competing in their first Afcon in 26 years, surprised the North Africans with a comprehensive performance in Angola to secure a maiden tournament victory.

Tunisia 1-1 Burkina Faso (8-7 pens) (1998) - A Tunisia side which would go on to feature at the World Cup later that year had to score an 89th-minute equaliser to force extra-time in their quarter-final tie, but were downed by the little-fancied hosts on penalties.