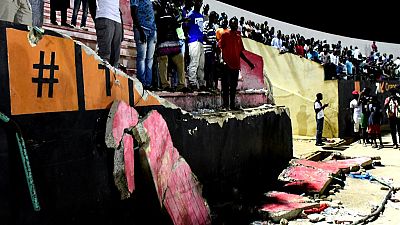 Monday's deadly stampede outside the Olembé stadium in Yaoundé, Cameroon, before an African Cup of Nations (CAN) match has many precedents around the world. In most cases, spectators are crushed to death against the entrance of the stadium as a result of a crowd movement, often caused by clashes between fans.

It is still a mystery how many people died in a stampede in Moscow's Luzhniki stadium in October 1982 at the end of a Spartak match against Dutch club Haarlem: 66 according to the authorities, but 340 according to the daily Sovietski Sport, making it the worst disaster in 50 years, ahead of the one in Peru in May 1964.

This one caused 320 deaths and a thousand injuries during a Peru-Argentina match at the Nacional Stadium in Lima, following a crowd movement in the stands. The doors of the stadium being closed, the supporters could not escape and died trampled or asphyxiated.

In Europe, the Heysel tragedy in Brussels in May 1985 (39 deaths) particularly struck people. Before the start of the match between Liverpool and Juventus, English hooligans invaded a stand where many Juve tifosi were present. The crowd's pressure led to the collapse of the dividing gates and a low wall.

On April 15, 1989, 96 Liverpool fans died in a stampede in the dilapidated stands of Hillsborough Stadium in Sheffield, during the semi-final of the English Cup between Liverpool and Nottingham Forest. In Egypt, in February 2012, in Port Said, clashes between supporters of the local club Al-Masry and the Cairo club Al-Ahly resulted in 74 deaths and hundreds of injuries in Port Said.