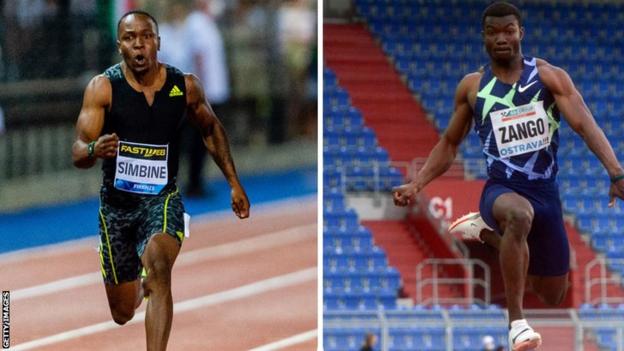 "Congrats to Akani Simbine!!! the new African record holder in the 100m. Its been a pleasure holding it for 15 years and 2 months," Fasuba posted on social media.

The South African's time is the second fastest of the year behind American Trayvon Bromell's 9.77s.

Zango broke his own African triple jump record for the fourth time with a leap of 17.82m, which was 15cm further than the mark he set in June.

However the leap was not enough for him to win the event in Turkey as he finished second to Portugal's Pedro Pichardo, who jumped 17.92m.

The efforts by the duo are the leading jumps this season.

There was also an Algerian record for Yasser Mohamed Triki at 17.33 as he finished third.

Sprinters Marie-Josee Ta Lou of Ivory Coast and Nigeria's Blessing Okagbare both set their personal season's best over 100m but could only finish third and fourth respectively.

Ethiopian athletes dominated the men's 3,000m as they claimed the top five places in the race, which was won by two-time World 5000m champion Edris Muktar.

There was disappointment for South African world record holder Wayde van Niekerk who was forced to withdraw from the men's 400 metres race.

The organisers in Hungary explained "His back was sore, wasn't feeling well, he was really devastated as he knew it would be a great race."

In his absence the race was won by reigning world champion Steven Gardiner of the Bahamas.