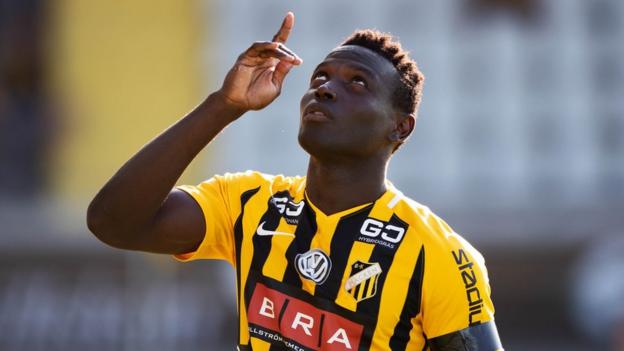 The striker last played competitive football for IFK Varnamo, who he joined in March, against Brage in the Swedish second tier five months ago.

He has been battling with a knee injury since 2018 which he suffered while playing for Greek club Panetolikos, which led to him undergoing surgery and kept him out of action for over a year.

"I took the decision based on the advice of a knee specialist in Sweden who told me to discontinue my career as further damage to the knee could see me end up in a wheelchair," Kamara told BBC Sport Africa.

"When I got the injury while playing in Greece in 2018, I was also told by doctors I would not be able to play again. But I didn't listen and I returned to Sweden to make a comeback.

"It's a tough decision because it wasn't part of my plan to end my career now. I'm disappointed and having sleepless nights. But the decision is good for me."

At the time of the injury he admitted that he had faced mental battles as well as physical ones, which he had overcome with the help of his then fiancee, who he married in June 2019.

Kamara, who featured 16 times for his country scoring four goals, has taken the tough decision less than three months before Sierra Leone's first appearance at a Nations Cup finals in 25 years.

Despite not playing for the Leone Stars since 2018, he still harboured hopes of returning to the national team.

"My dream, just like any other player, is to play in a major tournament for my country," he insisted. "We've now qualified for the African Cup of Nations finals but sadly I won't be there - it's not meant to be.

"I'm proud of the players who qualified the team and who will make it to Cameroon. I'll be giving my full support. I'll miss the excitement before and after the match, scoring goals, seeing team-mates and the fans."

He has already got plans for the future and will start as an international scout for IFK Varnamo and will also work with young people in communities in Sweden.

After starting his career with local clubs Mighty Blackpool and Kallon FC, Kamara spent the majority of his career in Sweden, where he played for Boden, former champions AIK Stockholm, Hacken BK, Orebro and Halmstads.