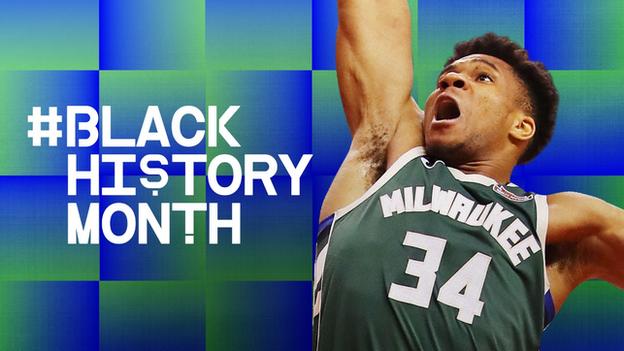 He's a two-time MVP winner, five-time All-Star and now an NBA champion - Giannis Antetokounmpo has had a remarkable rise to the top of the NBA.

Born in Athens to Nigerian immigrants, Giannis and his family weren't even recognised as Greek citizens until 2013, previously being classed as stateless.

A champion, activist and one of the most dominant players of his generation, 'The Greek Freak' is just as big a star on the court as he is off it.

'My mum used to sell stuff in the street and now I'm here. If I never sit at the top of the table again - I'm ok with that.'

Those were the words of Giannis after lifting the Larry O'Brien Championship Trophy in the summer of 2021.

The 26-year-old's upbringing in Greece is a well documented one, born into a system almost impossible for someone like him to break out of.

His mother working as a babysitter and father as a tradesman meant Giannis, alongside his older brother Thanasis, would sell sunglasses and handbags on the street to help his parents put food on the table.

The family suffered multiple housing evictions, with the racist attitudes of some in Greece causing further divide between society and the Antetokounmpos.

The New York Times reported that Giannis often slept in the gym after late night workouts, afraid of walking home because fascists and neo-Nazis would often target immigrants.

His statelessness meant he and his family lived in constant fear of deportation and didn't have access to national healthcare or public housing.

"Sometimes I would go to school, no breakfast. Sometimes, not every time. I would come back, no food," he told ESPN's Adrian Wojnarowski.

Step forward - basketball. The exit plan that would begin in the lowly Greek second division and finish in Milwaukee.

In 2011 he signed for Filathlitikos and after two seasons in Greece, Giannis was making a serious name for himself.

NBA scouts were put on notice of the teenager from Athens who was taking the game by storm.

There wasn't much film to assess him on and if there was, it was grainy and hardly visible.

That led to scouts getting over to Athens to see his performances with their own eyes, and in 2013 he put himself forward for the NBA draft.

Prior to the draft Antetokounmpo would have been unable to travel outside of the country as he had neither Greek or Nigerian documentation.

But his rise to stardom changed all of that.

After rejecting 18 years' worth of applications for citizenship, immigration officials finally accepted and documented Giannis and his family as Greek.

After this they decided to change their original surname of Adetokunbo to its new form - Antetokounmpo. A tricky name to pronounce and one draft announcer David Stern practised heavily before making the announcement.

Giannis was projected a high draft pick and that's exactly what he got: "With the 15th pick in the 2013 draft, the Milwaukee Bucks select Giannis Antetokounmpo!"

And the rest, as they say, is history. Back-to-back MVPs and last season, a championship to match.

It's one even the late Kobe Bryant saw coming.

Giannis is a dominating power forward who's showing no signs of stopping, but his work off the court is just as important.

'It's bigger than basketball to me'

Last year saw the NBA play out the climax of the 2019-20 season behind closed doors and in a 'bubble' because of the coronavirus pandemic.

Disney World Orlando was transformed into a temporary sports facility where Giannis' Bucks made the opening play-off round, finding themselves 3-1 up against the Orlando Magic.

But as game five approached, a different, yet familiar, story appeared in the news.

Jacob Blake, a black man, was shot seven times in the back by police in Kenosha, Wisconsin, not far from Milwaukee.

The incident came in a summer which had already seen global Black Lives Matter protests after the killing of George Floyd in May and several other police shootings.

The Bucks and Magic both completed a pre-game warm up but neither side returned to the court. An hour or so after the game was due to tip-off, the NBA released a statement announcing all play-off games wouldn't be taking place that evening.

Games were also halted in MLB, the WNBA, the NHL and MLS.

Game five went ahead the following Saturday and after a win over the Magic Giannis spoke to the press about how the players reacted to the news and a phone call they made to Blake's father.

"One thing that moved me as a human being was that, if you really want to accomplish something and get something done, you can. We were able to get his family's number within like 30 minutes.

"We came together as a team, went in a circle, talked to his dad and he was tearing up telling us how powerful what we did on that day was for him and his family, and that's bigger than basketball to me.

Antetokounmpo has never shied away from using his platform to discuss social issues.

In June 2020 he joined the Black Lives Matter march in Milwaukee, speaking to the crowd: "We want change, we want justice, and that's why we're out here. That's why I'm going to march with you."

And in the 2019 off-season Giannis returned to Greece to take part in an array of charity events giving back to a community that once saw him as an outcast.

We've still got plenty more years of Giannis - at just 26 it's frightening the amount he has achieved already and what he potentially could achieve going forward.

On the court and off it - The Greek Freak is slowly becoming an icon.

History of the BBC African Sports Personality of the Year award