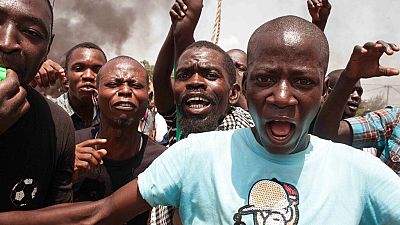 Burkina Faso protestors shout out as they take to the streets in the city of Ouagadougou, Burkina Faso, Thursday, Sept. 17, 2015. While gunfire rang out in the streets, Burkin   -

The African Union has suspended Burkina Faso from all its activities within the continental organisation following the January 24 Coup that ousted President Roch Marc Christian Kaboré.

This is the second suspension in one week following the Burkina Faso coup. ECOWAS was the first to suspend Burkina Faso. A delegation of ECOWAS heads of diplomacy on Monday arrived in the capital of Burkina Faso, Ouagadougou, for talks with members of the junta, which has been in power for a week.

Like its neighbors Mali and Niger, Burkina Faso has been caught in a spiral of violence since 2015, attributed to jihadist movements affiliated with al-Qaeda and the Islamic State group that has left at least 2,000 dead and 1.4 million displaced.

A jihadist insurgency that spread over Mali's border has killed over 2,000 people and displaced 1.5 million since 2015.

Since 2019, attacks by mobile combat units targeted mostly rural zones in the north and east of the country, fueling displacements and intercommunal violence.

Some 2,000 people were killed, among the civilians and members of the armed forces.

Islamist militants now move freely across entire swaths of the country and have forced inhabitants of some regions to conform to a strict version of Islamic law.

Meanwhile, the army’s continuing fight against the Islamists has depleted the country’s already meagre resources.