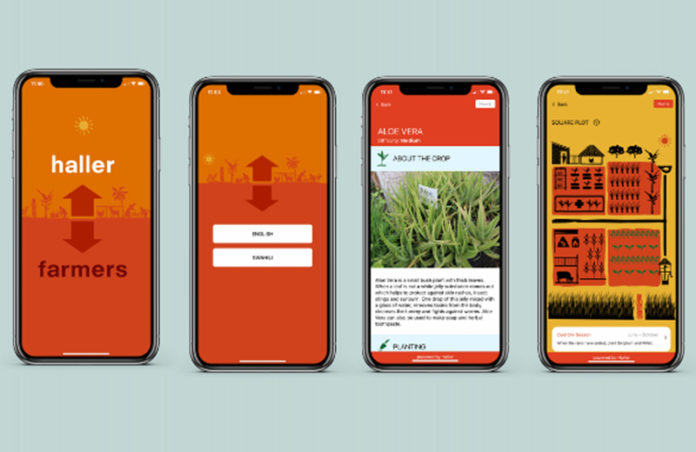 As technology develops and becomes increasingly available in rural East African communities, Kenya-based NGO and UK-founded charity, the Haller Foundation continues to evolve and innovate to meet the changing needs of farmers.

To this end, the Haller Foundation has officially launched its award-winning Haller Farmers App for iOS devices.

Originally a web-based application, Haller Farmers was then redeveloped in 2020 to an offline,
downloadable Android application allowing for wider accessibility.

To date, the Android app has been used by over 700 smallholder farms in more than 65 countries worldwide. It has proved vital in enhancing food production in Kenya by helping smallholders to revive degraded land, enhance soil fertility and therefore, produce higher yields of nutritious food. This enables communities to build resilience in the face of climatic and economic uncertainty.

The app has the power to transform landscapes, enrich ecosystems and build self-sustaining communities. It puts 50+ years of farming expertise directly into the hands of smallholder farmers across East Africa, sharing affordable, organic and environmentally friendly practices.

However, access to mobile technology in rural communities is still limited and the issue remains to get them connected. By the end of 2018, approximately 750 million people remained outside of mobile broadband coverage in Africa.

This is why Haller has now developed Haller Farmers for iOS, in the hopes of getting the app into the hands of extension workers and NGOs who work with farming communities that aren’t digitally connected.

“We hope that by expanding our user base in this way, we’re able to bridge the education gap and reach the 33 million small-scale farmers across Sub-Saharan Africa,” says the Haller Foundation about the newly iOS-supported app.

In November 2020, Haller Farmers won ‘Best Android App of the Year’ in the UK App Awards.

More recently it was shortlisted in the Tech4Good for Africa Award 2021. With the Android app’s increasing worldwide recognition, Haller believes that the iOS version will continue to have the same impact.

In addition to updates, new relevant content has been added such as COVID-19 resources and information for the younger generation on climate change, biodiversity and sustainability.

This innovative application is now available to download for free from both the App and Google Play Stores.