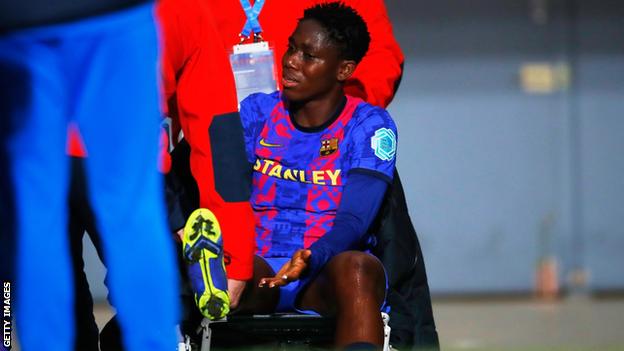 Nigeria and Barcelona's Asisat Oshoala says her knee injury during a 4-0 win over Hoffenheim is 'a tough pill to swallow'.

She was replaced in the 63rd minute of Barcelona's win on Wednesday in Group C of the Women's Champions League as the Spanish side look to defend their title.

"This one hit me so hard, it's a tough pill for me to swallow. I can't lie," Oshoala wrote on social media.

"Thank you for the messages, I will be back soon and even better."

The four-time African Women's Footballer of the Year is Barcelona's leading scorer this season with 12 goals in 12 appearances, and the top scorer in the Spanish League, with 11 goals in nine games.

The first African winner of the European Women's Champions League now faces a race to be fit for Nigeria's tricky 2020 Women's Africa Cup of Nations play-off against Ivory Coast in February.

Her country's captain and the continent's most decorated female footballer, Oshoala is expected to play a key role for the faltering Super Falcons against the Ivorians who stopped them from reaching the 2020 Olympics.

The team and Nigeria women's football coach Randy Waldrum have come under huge criticism after the struggling nine-time African champions edged bitter rivals Ghana 2-1 to reach the second round of qualifying.

The maiden BBC Women's Footballer of the Year winner scored at the 2019 Women's World Cup to help Nigeria reach the last 16 in France.

She joined the Spanish outfit initially on loan from Chinese champions Dalian Quanjian in January 2019 before signing a permanent deal five months later.

The former FC Robo and Rivers Angels star moved to Quanjian in the Far East in February 2017 from English side Arsenal Ladies, with whom she won the Women's FA Cup at Wembley in 2016.

She finished as the Chinese Women's Super League top scorer in 2017 with 12 goals to help her club to the title the same year.

Oshoala, who began her European career at Liverpool Ladies, won her third Women's Africa Cup of Nations with the Super Falcons in Ghana in 2018, scoring three goals as Nigeria lifted the title for a ninth time.