Basketball Africa League: 2022 season to tip off with women's landmark

Liz Mills says more must be done to encourage female coaches into basketball as she gets set to become the first woman to take charge of a team at the Basketball Africa League (BAL).

"I hope I can be an example for other female coaches to follow, and for clubs and federations around the world to engage more female coaches in their basketball leagues and programmes," she told BBC Sport Africa.

"Sport elevates society to a place where we can bridge the gap between racism, sexism and discrimination, and I am proud to be part of the basketball community as we look to shrink that gap.

"However, we must not be complacent. There is still a long way to go and we need women at all levels within federations and leagues - including at the top - so that we can instigate change and provide equal opportunities and reshape the conversation around female coaches and females in sport."

AS Sale are among six teams in the BAL's Sahara Conference, which will be held in the Senegalese capital Dakar from Saturday until 15 March, with the Nile Conference, also featuring six sides, to be held in Egypt next month.

The first edition of the BAL was hosted in a coronavirus bubble in Kigali, Rwanda, and the league has added 12 more games and will be played across Dakar and the Egyptian capital Cairo before the final stages in Kigali in May.

“Our goal is to build the BAL into one of the world's best basketball professional leagues in the years to come," BAL president Amadou Gallo Fall told BBC Sport Africa.

"In our inaugural season, we were able to lay a foundation that really positions us for success in achieving our lofty ambitions in the long term. Our initial season has given us reasons to be very confident that our commitment to building a top-flight professional league in Africa is very realistic."

Basketball can 'take off' in South Africa 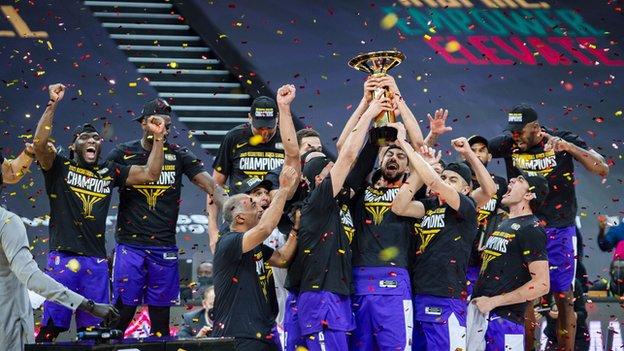 Champions Zamalek and AS Sale are among five teams returning to the BAL, with seven clubs making their debut this year across the two conferences, with the Nile edition to be held in the Egyptian capital Cairo.

Clubs from Angola, Tunisia, Egypt, Senegal, Rwanda and Morocco all booked their tickets as national champions, while the six others emerged through qualifiers.

Among the debutants are Cape Town Tigers, with owner Raphael Alexander Edwards saying their involvement next month will help the sport "take off" in South Africa.

South Africa is the only country to have hosted the NBA Africa Game, an exhibition match with NBA players which was staged in 2015, 2017 and 2018, but the reality is that cricket, football and rugby dominated the country's traditional sporting landscape.

“I believe it’s going to happen because basketball is more of a lifestyle sport, more than any of these other sports, so it really connects to the streets, to culture, to pop culture," the American told BBC Sport Africa.

"It is something great for South Africa, where there is a tonne of talent which hasn't been recognised enough, and the Cape Town Tigers is putting the country back on the map.

"When it comes to operating and commercialising a professional sports league, we are blessed to be able to tap into all those resources and all that expertise," Gallo Fall added.

"The partnership we have with Fiba is going to ensure that we are the permanent professional basketball league in Africa going to attract elite talent and retain elite talent from Africa."

Meanwhile, the BAL has announced that one NBA Academy Africa prospect has joined each teams for the league's 2022 season.