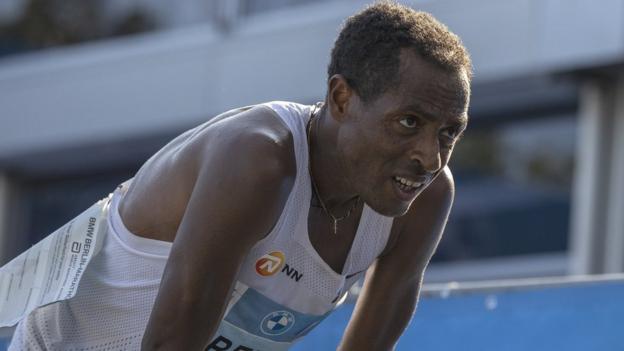 Ethiopian athlete Kenenisa Bekele has insisted that he has no plans to retire from the sport after finishing third at Sunday's Berlin Marathon.

He eventually missed Kipchoge's time by over five minutes, finishing a minute behind race winner and compatriot Guye Adola.

The three-time Olympic champion is now targetting the world record again in next year's race in the German capital, while also refusing to rule out the 2024 Olympics in Paris.

"I have information from other athletes that even at this age - 40 - many athletes can achieve good results and you are not too old for the marathon," he said.

"If I'm healthy and prepared, I'd like to run again in Berlin for the world record."

Bekele explained that his display on Sunday had been affected by catching Covid-19 earlier this year, even if he had suffered no strong symptoms and had recovered well.

He said the issues thrown up by coronavirus in general had made a greater impact.

"For me, the big problem was a lack of training because of the pandemic," he explained.

One of athletics' finest long-distance runners, Bekele has surprisingly missed the last two Olympic Games after not being picked by the Ethiopian Athletics Federation.

Bekele and the federation have not seen eye-to-eye on its recent selection process and so has been overlooked for the marathon despite being the second fastest man ever over the distance.

In 2019, Bekele ran a time - in Berlin - just two seconds slower than the record tset by Kipchoge, also in the German capital, the previous year.

"For sure I want to be part of [Paris 2024] but it's difficult to decide according to the Ethiopian federation," he explained.

"I have only one country. Even if I want to go to Paris, I don't know their criteria again so it's going to be difficult."