Eritrea's Biniam Girmay has his sights set on further success for both his nation and himself after he won silver in the under-23 men's race at cycling's Road World Championships on Friday in Belgium.

The 21-year-old emulates Louis Meintjes, whose two eighth-place finishes at the Tour de France are the best ever by an African, after the South African won silver in the same category in 2013.

Girmay's sprint to silver behind Italian winner Filippo Baroncini further cemented Eritrea's reputation as Africa's leading cycling nation and he is already looking to the future.

"I got silver but one day I hope to take the rainbow (given to the senior world champions) jersey - maybe in 2025, in Rwanda," he said after the race.

"The World Championships will be held in Kigali. It would be fantastic to win there."

Despite his accomplishment thrusting him into the spotlight, Girmay is determined to keep his feet firmly on the pedals.

"It [the silver medal] is for all of us Eritreans," he tod BBC Sport Africa. "For now, I am not the big star - there are bigger ones than me.

"We ride a bike to get results and a good career, so hopefully I can get more results like this."

In some ways it was fitting for Girmay to finish behind an Italian considering the impact the European nation has had on Eritrean cycling.

"A lot of Italians were living in Eritrea and they began racing. People started to love the sport," explains Natnael Berhane, who has raced in all three of cycling's Grand Tours in France, Spain and Italy.

"That is why it became a popular sport in Eritrea. You have 35 race days per year, which is a lot, almost every Sunday. The fans and the media came. That lifted cycling." 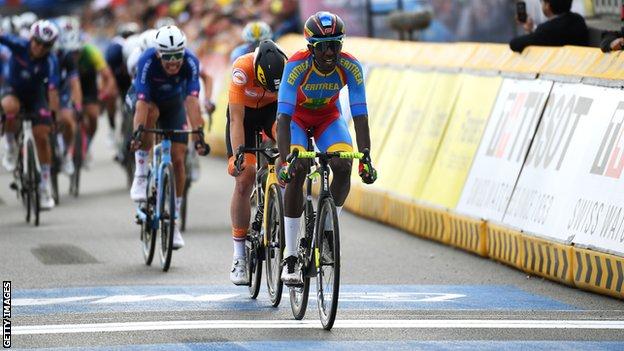 That popularity has translated to success for Eritrea at continental level with six wins, more than any other country, in the men's elite road race at the African Road Championships.

The country's biggest feat globally came at the 2015 Tour de France when Daniel Teklehaimanot became the first African to wear the polka dot jersey and Merhawi Kudus, then 21, was the field's youngest rider.

While his fellow cyclists provided him with the inspiration, it was those closer to home who provided the support as well as the sport's global body, the UCI.

Supported by his parents, family and friends, Girmay picked up a mountain bike as a teenager before transitioning to a road bicycle that saw him rise to prominence locally.

In 2018, he then completed a clean sweep of road race, individual and team time trials at the African Junior Road Championships.

He honed his talents that year at the UCI's World Cycling Centre in Aigle, Switzerland, but a young Girmay got homesick.

"I needed my family, but the UCI understood me, so I stayed three months and then I went home for three months," says Girmay.

"It wasn't hard, but you still miss your father and mother. The year after, I adapted. I said: 'This is my work, I like to ride a bike, I like to race in Europe and this is also my dream, I am also living my dream'."

The UCI invites riders from backgrounds that could prevent them from reaching the elite to Aigle and the centre played a pivotal role in the development of Girmay, Kudus, Teklehaimanot and Berhane.

At the foot of the Swiss Alps, all received coaching, gained experience and exposure to help them reach the next level.

"If the UCI centre didn't exist, we would be blocked, stuck in Eritrea," says Berhane. "The young generation of Girmay and Natnael Tesfatsion ride to win, which is a good example to the young Eritrean riders, to be motivated.

"Eritrean riders now think about how to become a professional. When Teklehaimanot and I came, there was no one professional. We struggled a lot to get to that level."

With Girmay on the books of Belgian team Intermarché-Wanty-Gobert, Eritrea now have four riders (Kudus, Berhane and Amanuel Ghebreigzabhier as well) on teams competing at World Tour level, the highest in professional cycling.