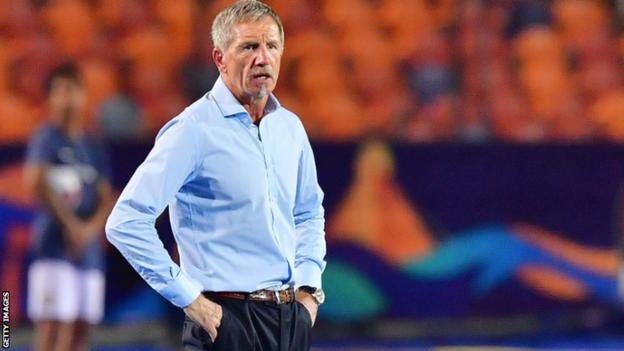 The Englishman has yet to sit on the bench since being announced as coach on 9 June, after his predecessor, Gavin Hunt, was sacked 12 days earlier with the club performing poorly domestically.

A problem with his work permit meant he has not been able to direct the team pitch-side but Baxter confirmed he finally has the necessary documentation to do so as he flew off to the final in Morocco.

"I've been working unofficially since I came - now I'll be on the bench," Baxter told BBC Sport Africa.

Chiefs are in African club football's showpiece event for the first time, with Baxter helping the side overcome Wydad Casablanca in the semi-finals by leading training and devising a game plan.

He had still to watch on from the stands though as Chiefs put their poor domestic form behind them.

"To walk into a club that is struggling badly in the league but going very well in Africa is a little bit bizarre," he added.

The 67-year-old says his current experience is one of the stranger ones in a coaching career lasting four decades, during which he has led national teams and, among others, Chiefs from 2012-2015.

Ironically his situation mirrors that of his opposite number, with Al Ahly's South African Pitso Mosimane having been appointed two months before the Egyptians won the 2020 Champions League.

Baxter struggled to put his finger on exactly why a team that has reached the Champions League final could only finish eighth in the South Africa's Premier Soccer League - 31 points behind champions Mamelodi Sundowns.

"I think, when you look at clubs globally, especially during these Covid times, without crowds some of the bigger clubs suffered more than others," he said.

"They fail to reach those expectation levels and there develops a certain vibe, and it's difficult even for good coaches, and good players, to turn that around. It's not the fault of people, it's just a phenomenon sometimes."

Despite the poor domestic season and recent coaching changes, Baxter and his players believe they can become the third South African side to lift the trophy, after Orlando Pirates (1995) and Mamelodi Sundowns (2016).

"I think we've got a decent chance because we are in a final, but certainly we are the underdogs," he said of meeting the record nine-time champions.

"They will be devastated if they don't beat us, I'm sure. But our players certainly think that there is a scenario where we can beat them and we are certainly not beaten before the game has started.

"We are hoping to give a very, very good account of ourselves, and just be better than they think we are."

Chiefs captain Bernard Parker, 35, says he and his team-mates are not surprised by their progress on the continent.

"The reason I say that is we believe in ourselves in terms of our quality and strength," he said. "I wouldn't say it is a surprise, it was more of a mental issue.

"Domestically, things didn't go well and then it became very tough to dig yourself out of the ground. Doing well on the continent was very motivational and we've looked to keep it that way."

"The games were different. It was also two different leagues."

Baxter says one of Al Ahly's biggest strengths is that winning has become a habit for them and that Mosimane - a former Bafana Bafana coach, like the Englishman himself - has given the Cairo side a different edge.

"They are quick all over the field and play a style that borders on a non-African type of football," explained Baxter, who has twice led South Africa.

"They play a mix of Pitso's possession-based football and the more direct North African approach to the game.

"They are an efficient outfit and are used to winning - that's probably their biggest weapon. They believe they will win games when they go into them, both in the league and on the continent.

"We've got to make sure that they don't build on that, by feeling more and more comfortable as the game goes on and we've got to hurt them more than they think we will."