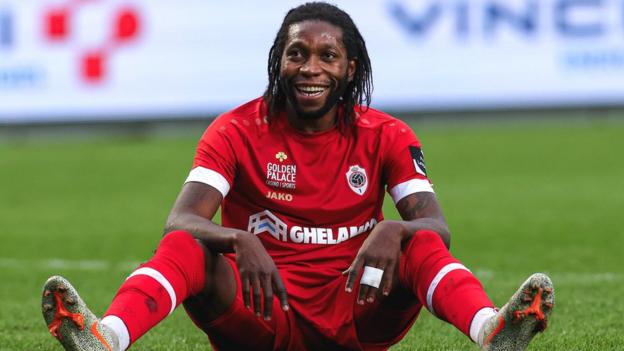 The 36-year-old, who was a free agent since leaving Kuwait SC in July, penned a deal with the promotion hopefuls - the details of which have not been disclosed.

"When a player like Dieumerci becomes an opportunity, you have to seize that opportunity," club chairman Antoine Gobin said in a statement.

"He has been important in the history of many clubs he played for in the past.

"That is one of the main reasons why he returns to Belgium today - to make it an unforgettable season for SK Beveren."

Mbokani started his European career on loan in 2006 at Anderlecht where he won the top-flight title, before joining rivals Standard Liege the following year.

He scored 50 goals and won the Belgian league twice with Standard Liege in three seasons.

Mbokani had spells at French side AS Monaco and German club VfL Wolfsburg, before returning for a second spell at Anderlecht in 2011 - scoring 34 goals in 53 games in his last two seasons as they won successive Belgian league titles.

A successful time at Dynamo Kiev followed, where he scored 31 goals in 77 appearances, winning a league title and four domestic trophies in Ukraine, before loan spells at English clubs Hull City and Norwich City.

The 2012 Belgian league MVP, returned for a three-year stint in the league with Antwerp in 2018 and won the domestic cup in 2020 before switching to Kuwait SC in 2021, where he helped the club to the Kuwaiti title.

Born in Kinshasa, Mbokani has 22 goals in 49 appearances for DR Congo in his topsy-turvy international career.

He played in three Africa Cup of Nations tournaments and won bronze with the Leopards in the 2015 edition.