DRC: At least 18 dead in fighting between the army and ADF rebels in the east 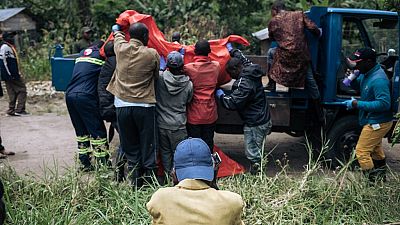 A man mourns the death of a relative is hoisted onto a flatbed truck in the village of Manzalaho near Beni on February 18, 2020, following an deadly attack   -

Fighting on Thursday and Friday between the army and the armed group Allied Democratic Forces (ADF) in the east and northeast of the Democratic Republic of Congo has left at least 18 people dead: 9 civilians, a soldier and 8 rebels, sources said.

"At least 9 civilians were killed on the night of (Thursday to Friday) in #Katanda (territory of #Beni, North #Kivu). Searches are still underway. The #ADF are suspected," the Kivu Security Barometer (KST in English), which has experts in the area, wrote in a tweet.

"There was an ADF incursion from 10pm to 3am in the village of Katanda: nine civilians were killed, dozens of houses were burned and several people are missing," Abdul Kalemire, the leader of the Bashu chiefdom (Beni Territory, North Kivu), told AFP for his part.

The army, whose closest position is 11 km from the village, intervened "late" but allowed the release of 15 hostages, Kalemire added.

"It is a strategy of the ADF to lure the DRC Armed Forces (FARDC) and peacekeepers out of the forest from which they chased them," provincial deputy Saidi Balikwisha told AFP.

In this area, the army and the peacekeepers have conducted joint operations that have dislodged the ADF from their main strongholds in the forest.

In neighboring Ituri province, ADF rebels attacked the village of Malaya. "The enemy could not resist the army: eight ADF were neutralized (killed) and one soldier fell on the field of honor," Lieutenant Jules Ngongo, army spokesman in the province, told AFP.

The ADF were originally Ugandan Muslim rebels, but they have been operating for nearly 30 years in eastern DRC, where they are accused of killing thousands of civilians. The jihadist organization Islamic State (EI) lists the group as its branch in Central Africa.

The U.S. placed them on a list of "terrorist organizations" affiliated with the EI in March. 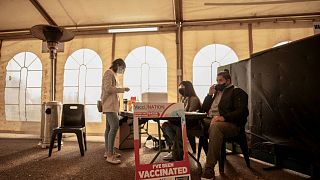