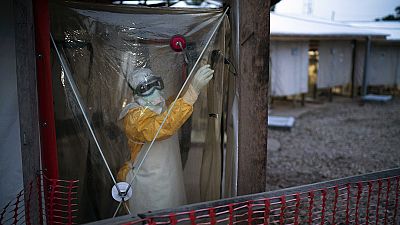 In this Saturday, July 13, 2019, file photo, a health worker wearing protective suit enters an isolation pod to treat a patient at a treatment center in Beni, Congo DRC.   -

The Democratic Republic of Congo declared Tuesday the end of a new "epidemic" of Ebola, during which a single case was confirmed, while neighboring Uganda is trying to contain another, unrelated, "rapidly evolving", announced the Africa office of the World Health Organization.

The virus had reappeared six weeks ago in the province of North Kivu (eastern DRC), a country that has experienced about 15 Ebola epidemics since the discovery of the disease in 1976.

With only one case confirmed this time, this epidemic is "one of the least catastrophic" that the DRC has experienced.

A few days after the epidemic was confirmed, health authorities started "a vaccination campaign according to the belt strategy", the World Health Organization. According to the WHO, "more than 500 people were vaccinated, including 350 contacts, contact persons and front-line workers".

A previous epidemic, the 14th, which caused five deaths in three months in the west of the country, was declared "over" on July 4, WHO-Africa said in a statement.

This announcement comes as Uganda, DRC's neighbor, is "racing to contain another outbreak" of Ebola, unrelated to the one in DRC.

According the Ugandan Ministry of Health, there have been 18 confirmed cases since Monday, Sept. 19.

The WHO regional office says the Ebola outbreaks in the DRC have been caused by Ebolavirus "Zaire" strain - "one of six species of the Ebola genus". It adds that "Uganda is fighting a rapidly evolving epidemic caused by the Sudan Ebolavirus" strain.

Three US citizens of Cameroonian origin charged for alleged involvemen...