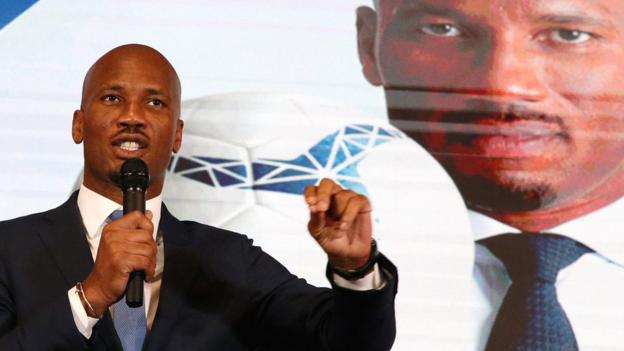 Former Chelsea striker Drogba, named in the Premier League's Hall of Fame this week, was ousted in the first round of voting with just under a fifth of the vote.

In the second round, Diallo, a businessman and current FIF executive member, squeezed out former FIF vice-president Sory Diabaté by 63 votes to 61.

Saturday's election in the political capital Yamoussoukro had been postponed several times since 2020, primarily over the ongoing issues over the eligibility of certain candidates, with Drogba prominent among them.

After Fifa appointed a normalisation committee to oversee Ivorian football, Drogba's candidacy - initially rejected over whether he had the requisite number of official backers - was eventually accepted.

Drogba played more than 100 times for the Elephants, including at the 2006 and 2010 World Cups, but was told in August 2020 that he was not eligible to stand in the election.

After intervention from Fifa, the 44-year-old, who won four Premier League titles, four FA Cups and the Champions League across two spells with Chelsea, retained his hopes of running the game in the West African country.

Drogba's achievements and ambitious programme for the development of football in Ivory Coast had raised his popularity, and after his defeat many of his supporters expressed their anger on social media on Saturday.

"The presidents of clubs have just killed Ivorian football, by eliminating Didier Drogba," one user, called Rosana225, said. "I hope that Ivorians will not take revenge by boycotting the 2023 Afcon."

Diallo has a mandate of four years and the organisation of the 2023 African Cup of Nations, which Ivory Coast is hosting, will be its first major challenge.

Ivory Coast are two-time champions of Africa, having won the Africa Cup of Nations in 1992 and 2015.

Al Ahly 'victims of lack of fair play' ahead of African Champions Leag...

Traore on 2005 Champions League final: 'I knew destiny was with us'