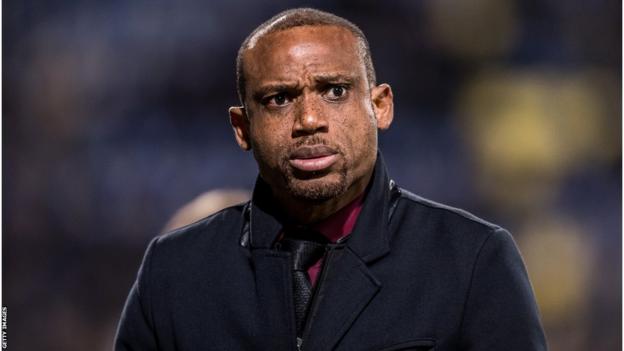 Former Nigeria captain coach Sunday Oliseh has said that current players and coaches must be involved in any discussion about having a World Cup every two years.

Football's governing body Fifa is currently exploring the idea of holding the sport's global showpiece every two years, instead of four.

Ex-Arsenal manager Arsene Wenger, in his position as Fifa's chief of football development, has been speaking to scores of prominent former players in Doha this week about the proposal.

While former stars such as Ronaldo of Brazil and Denmark's Peter Schmeichel have given their backing, Oliseh insists that current players and coaches need to be part of the process.

"The Mbappes, the Benzemas, you have to ask all those ones and they have to give their opinion. They are the actors now.

"To say 'I played three World Cups' would be great for some players, but let's not forget that the actual employer of players are the clubs. No matter what happens with the national team, they are the ones who pay the wages.

"They are the ones giving the players the financial, psychological and health capability to be at their best to participate in major tournaments for their countries.

'My opinions are to go against Arsene'

While Wenger says he is "100% convinced" his plan for a new international match calendar based on a World Cup every two years is the best way forward for football, Oliseh is not so sure.

The former Arsenal boss has a number of ideas, including:

"I am just looking at the principal itself and what it could bring to the game. As someone who loves watching quality football, I think overloading it does not make it better.

"The players will need rest. You are best after you have taken your rest."

Oliseh also has concerns about how the changes would affect the prestige of the World Cup, which many believe is perpetuated by its relative rarity.

"Personally as a player, it would be interesting to say 'OK, in a six-year period, I could play three World Cups'," he said.

"But what actually makes the World Cup exceptional is the build-up to the event - the four-year wait and the fact that sometimes it's a once-in-a-lifetime occasion for certain players."

Despite his reservations and those of others, Oliseh admits he can understand the support of the Confederation of African Football for the proposal.

"I can see why African football is happy with it because it goes with the Africa Cup of Nations which, every two years, helps us to sell ourselves," he pointed out.

"We need it. We need funds coming in like the ones these major tournaments bring in - we need it from that point of view."

It is currently unclear how Africa's national teams can play qualifiers for two separate competitions - the World Cup and Nations Cup - every two years.

Fifa expects a decision to be made on a biennial World Cup later this year.