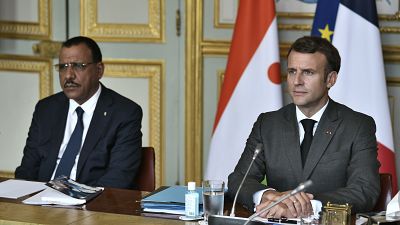 French President Emmanuel Macron said Friday that France would begin closing its bases in northern Mali before the end of the year, as part of a drawdown of French troops fighting Islamist extremists in the Sahel.

Military bases in Kidal, Tessalit et Tombouctou, key sectors in the fight against armed groups in the region, will also be closed.

"The shutdowns of these sections will start in the second half of 2021 and be completed by early 2022," Macron said during a press conference following summit talks with the leaders of five West African nations.

France will, in the long run, maintain 2,500 to 3,000 military personnel in the region, French President Macron added.

Macron announced last month that he would start removing much of the 5,100-member Barkhane force in the Sahel after eight years of helping local forces stave off the threat from Islamist rebels linked to Al-Qaeda and the Islamic State.

But the French president insisted that France would remain a long-term partner for the G5 countries of Mali, Burkina Faso, Chad, Mauritania and Niger.

"Our enemies have abandoned their territorial ambitions in favour of spreading their threat not only across the Sahel, but across all of West Africa," Macron said at a press conference with Niger's President Mohamed Bazoum.

"Unfortunately this offensive implies increased pressure on all the Gulf of Guinea countries, which is already a reality," he said.

Analysts have warned that the jihadist threat in the five Sahel countries could lead to increased terror threats in countries including the Ivory Coast or Benin.

"We are going to reorganise ourselves in line with this need to stop this spread to the south, and it will lead to a reduction of our military footprint in the north," Macron said.

Survivors of conflict to meet Pope in DR Congo