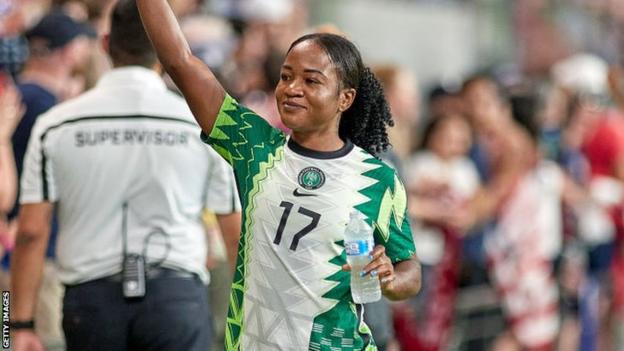 The 27-year-old forward leaves Levante five months into a three-year contract as she opts for a new adventure with the reigning Russian champions, who have another African - veteran Cameroon forward Gabrielle Onguene - on their books.

"Levante UD and CSKA Moscow have reached an agreement for the transfer of Francisca Ordega. The Nigerian landed in the granota team in the winter market of last season 2020-21 and participated in three matches," the Valencia-based club announced on its website.

Ordega has signed a two-and-a-half-year deal with ambitious CSKA who are competing in the new-look 2021/22 Uefa Women's Champions League.

It's a return to the Eastern European country where her overseas career began with Khimki-based Rossiyanka in 2012, whom she joined after stints in her native country with Bayelsa Queens and Rivers Angels.

"I love to challenge myself every time so I enjoy taking on challenges to test myself," she had told BBC Sport Africa.

"Women's football is fast growing in the last five years and teams are beginning to compete on a big stage.

"Playing in big competitions like the World Cup with your country and the Champions League with your club will only bring out the best in you."

An established international player, she scored twice to help Nigeria win a ninth Women's Africa Cup of Nations title in December 2018 and made the final three for Caf's women's Player of the Year award for 2018.

The much-travelled and vastly-experienced Ordega previously played in Russia and Sweden before moving to Washington Spirit in March 2015.

Back in December 2016, she became the first African to play in the Australian Westfield W-League when she joined Sydney FC on loan.

The former Nigeria youth international also had another loan stint at Spanish club Atletico de Madrid Femenino in 2017, followed by a spell in Asia with Chinese outfit Shanghai Shengli.

That move to China sealed her place in African football's record books as the first female player from the continent to play across five continents (Africa, Europe, North America, Australia and Asia).

Ordega, who has represented Nigeria at all international levels, has over 45 caps for the Super Falcons and also boasts experience at three Women's World Cups in 2011, 2015 and 2019.