Gabon: Fegafoot insists it can investigate alleged paedophilia in football 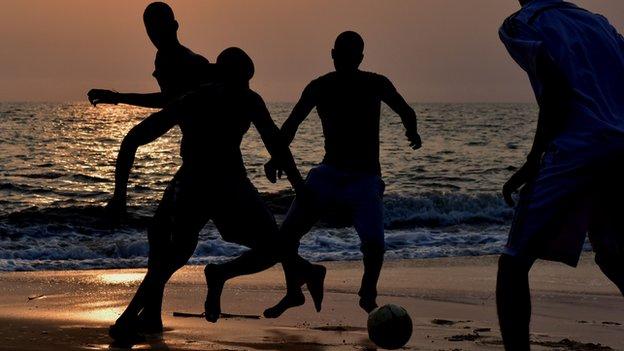 Gabon's football federation (Fegafoot) insists it can investigate alleged widespread paedophilia within its community despite claims it is not fit to do so.

Global players' union Fifpro, which has complained to world governing body Fifa, says Fegafoot's investigation has a conflict of interest.

"At least two of those arrested were employed by Fegafoot and closely connected to powerful people in Gabonese football," Fifpro told BBC Sport Africa.

Fegafoot says its ethics committee, which has opened an investigation, is independent.

In a statement last month, Gabon's Sports Ministry said the alleged sexual abuse of minors in the country by multiple accused perpetrators could number "hundreds of alleged victims".

Five members of Gabon's football community have been arrested following allegations made against them of raping and sexually abusing minors.

Fifa says its joint investigation with Fegafoot follows its rules.

"Fifa can confirm that the matter is being handled in line with Fifa's Code of Ethics," the Zurich-based body told BBC Sport Africa.

According to its Code of Ethics, Fifa can only handle an investigation itself when a case "has not been investigated and judged … by the relevant judicial bodies of the association concerned".

On Tuesday, Fegafoot president Pierre-Alain Mouguengui was summoned by Gabon's anti-corruption body (CNLCEI) to attend a hearing on Monday, 7 February.

After seeing Fifa conduct similar investigations in both Afghanistan and Haiti alongside local federations, Fifpro questions the conflict of interest of an organisation investigating itself.

In both these countries, victims were asked to give testimony to federations whose leaders were ultimately found to have been incriminated.

In 2019, former Afghanistan football federation president Keramuudin Karim was banned for life by Fifa after being found guilty of "abusing his position" and "sexually abusing" players in the women's national team.

Haiti's former football federation president Yves Jean-Bart was banned from football for life by Fifa the following year after being found to have "sexually harassed and abused female players, including minors" between 2014 and 2020.

Gabon's case differs in that the alleged abuse involves young male footballers, not female ones, with Fegafoot hoping to receive victims' testimony during its inquiry.

"Fegafoot is not fit for purpose to investigate such serious allegations," Fifpro added.

"For years, Fegafoot has showed it is not capable of running Gabonese football and has done nothing to respect the rights and livelihoods of players in Gabon. It is simply not realistic that Fegafoot can handle an investigation of this magnitude.

"To ensure a fully independent investigation, but also to ensure its safeguarding duty towards victims, we believe that Fifa needs to completely take over Fegafoot's investigation."

For years, the late or non-existent payment of players has affected Gabon's football league, prompting footballers to go on strike.

Gabonese sport has been rocked in recent weeks by several allegations of abuse of minors, not only in football but also in tennis and taekwondo, which has prompted a government inquiry.

Gabon's President Ali Bongo has described the claims of abuse across sport in his country as "very serious".

Fegafoot says it started its own investigation started immediately after the allegations first appeared in The Guardian, a British newspaper.

The body's spokesperson, Pablo Moussodji Ngoma, told the BBC that Fegafoot itself "is also a victim".

Last week, Serge Mombo, the head of Gabon's top league and who was recently employed by Fegafoot as a kit man during the country's recent Africa Cup of Nations campaign, was arrested.

He has previously denied accusations that he sexually abused young players and demanded sex as a condition of them securing places in Gabon's national teams.

After eight days in detention, Mombo has been allowed to return home but must attend a police station every day as the investigation continues.