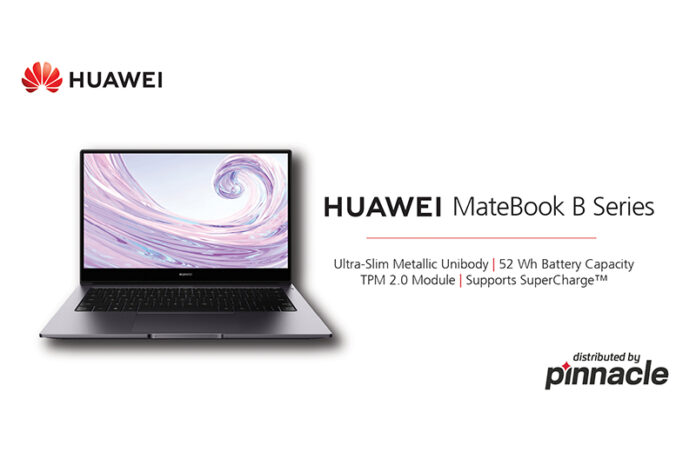 With Pinnacle set to officially launch this newly onboarded division to their customers during the month of November through strategically partnered events, the team also announced that they would be expecting their first shipment towards the end of November consisting of a few exciting products.

Although similar in majority of the features, the two notebooks differ primarily in screen and body size. The MateBook B3-410 is a 14-inch IPS FHD resolution display supporting 180-degree movement and is feather-light at 1.38kg’s and ultra-slim metallic unibody, while the MateBook B3-510 boasts a 15.6-inch IPS FHD resolution display and comes in slightly heavier at 1.53kgs.

With the B-series notebooks specifically aimed at businesses, all the units are equipped with a built-in fingerprint reader conveniently positioned on the power button giving user seamless access to their device. With virtual meetings quickly becoming the norm, these units’ possess a hidden 1 MP camera ensuring crystal clear display throughout.

Accommodating users on all interfaces, both units have one USB-A 3.0 port, one USB-C port which supports charging and data transmission, one HDMI port, one 3.5mm audio jack connection, and one mini-RJ-45. As for a USB-A 2.0 port, the B3-410 has one, while the B3-510 has two. The B series notebooks are fully upgradeable to Windows 11 thanks to the TPM 2.0 module present on the units and supports SuperCharge for a selection of Huawei phones.  Due to the large-capacity battery of up to 56Wh, users can enjoy hours of uninterrupted productivity.

Beautifully and elegantly designed giving this unit an aesthetically pleasing appeal, the Huawei E5577-321 is an LTE mobile WiFi router enabling users to take their business on the road. Equipped with an advanced screen and menu, this unit is simple to use with a working time of 12 hours, and 700 hours of standby time, ensuring users can complete tasks timeously – anywhere, anytime.

The Huawei E5577-321 can accommodate up to 10 users simultaneously with high-speed 4G LTE connectivity for seamless performance.

Avoid disappointment and pre-order your units through Pinnacle ICT today!

For more information, contact the Pinnacle Huawei team via email Huawei@pinnacle.co.za or phone (011) 265 3000.

Achieving Compliance with ISO/IEC 27001: A Guide to Lead Implementer T...

Major trends that CIOs and CDOs must plan for in 2023

How to Secure Sound Contract Renewals in 2023

Accident claims: How AI can save consumers billions