Kenya suspends part of the elections in four places 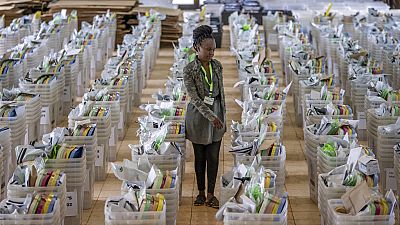 An electoral worker walks past ballot boxes and election materials as they sit ....   -

Head of Kenya’s electoral body, IEBC has suspended voting in four places in the country as ballot papers in those areas have wrong details.

The affected areas are Mombasa and Kakamega governor seats and Kacheliba and Pokot South MP seats.

Details and images of the candidates listed on the ballots were wrong, Chairman Wafula Chebukati of Kenya's electoral body, the IEBC said in a BBC report.

On Tuesday, August 9, approximately 22.1 million registered voters in Kenya will be exercising their constitutional rights to elect a new president as well as legislators.

Burkina Faso: Recounting the attack on a convoy in Gaskindé days befor...

Lesotho: Unemployment, the economy among voter's concerns ahead Friday...

Burkinabes react to the appointment of Ibrahim Traoré as head of state...

Amid climate politics, Uganda presses on with oil pipeline [Business A...