Livelihood of Cameroonian pygmies at risk from persistent logging

A worker legally cuts a tree by an industrial company near Kisangani in the north-east of the Democratic Republic of Congo on September 24, 2019.   -

Pygmies, who have been hunting in the Baka forests for about 5,000 years in Cameroon, are being left homeless by logging and forest destruction.

The rainforests inhabited by the Pygmies are being rapidly depleted by timber production and mining. Integration efforts to settle the Pygmies, who are not allowed to live in or even enter the forests that have been turned into national parks, are not succeeding.

"Every year 8 million hectares of forest are logged and threaten the way of life of the Baka, the Pygmies in general. If all this is cut, the Baka are doomed to lose their identity in general," said Venant Messe a coordinator at Okoni area.

Thousands of Pygmies living in the rainforests of the Nomedjo region of southern Cameroon, near the border with Congo, have been forcibly removed from their habitat for the timber trade.

"We are linked to the forest, it is our heritage. We can find all the species there, all our food comes from the forest," said Dieudonné Tombombo, a local resident.

"This is the truck that picks every day, they are the ones who have destroyed the forest, it's them, it's their work," said Emile Elenga, who lives in the jungle.

The livelihoods of about 10,000 Baka Pygmies in southeastern Cameroon are under threat, according to a study in Scientific Reports by scientists from the Center for International Forestry Research (CIFOR), which shows that their available hunting area is also in danger. 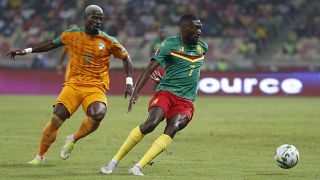