Brentford's Bryan Mbeumo made his Cameroon debut in a 2-0 defeat to Uzbekistan as the Indomitable Lions lost the first of two final warm-ups prior to naming their World Cup squad.

The forward represented France at junior level before switching allegiance to the central African nation of his father last month.

The 23-year-old played the full 90 minutes at Goyang Stadium near Seoul in the north of South Korea, where Nicolas Nkoulou returned for the first time since winning the 2017 Africa Cup of Nations final.

The Greece-based defender, 32, was persuaded to come out of international retirement by coach Rigobert Song for November's World Cup in Qatar and also played the entire game.

Mbeumo joined Brentford, with whom he has scored six Premier League goals, in 2019 after coming up the youth ranks in France, who he represented between 2015 and 2020 at varying age levels.

Yet Russia-based duo Hojimat Erkinov and Oston Urunov scored either side of half-time to give Uzbekistan the win over the five-time African champions, who begin their World Cup campaign against Switzerland in November.

Cameroon, who are also grouped with Brazil and Serbia in Group G at the finals, will take on hosts South Korea in another friendly, in the capital, on Tuesday.

Later on Friday, Morocco and Ghana take on Chile and Brazil respectively as they continue their preparations for the World Cup, with African champions Senegal facing Bolivia on Saturday.

Elsewhere, Tunisia coach Jalal Kadri declared himself satisfied with his side's tough 1-0 win over Comoros in the Parisian suburbs of Croissy-sur-Seine as their build-up to the World Cup continues.

Kuwait-based forward Taha Yassine Khenissi, who served a doping ban last year, headed home the only goal early in the second half on Thursday.

"We played against an opponent who proved again to be a top side as shown during the last Nations Cup, an opponent with quality, good potential and squad," Kadri said of the debutants, who reached the last 16 earlier this year.

"After a difficult first half, we found our rhythm. The quality of the pitch prevented both teams from playing free-flowing football, but we are satisfied with the team's continuous growth by keeping a winning trend going.

"We also achieved our objective to see a lot of players involved in order to give them game time on the pitch before the World Cup."

Tunisia's next friendly comes against five-time World Cup winners Brazil in a prestige clash on Tuesday, also in the French capital, with the Carthage Eagles suffering a 4-1 friendly loss to the South Americans in 1974 - the nations' only previous senior meeting.

Lorient defender Montasser Talbi is aware of Brazil's reputation in world football but insists they can spring a surprise.

"I'm sure a win is possible because we are an ambitious team. We showed it during the last Kirin Cup by beating Japan in their home and Chile," the 24-year-old told BBC Sport Africa.

"We are fully confident and ambitious. We know it is going to be a special match - with sold-out capacity at the Parc des Princes against a wonderful team, maybe the best offensive squad in world football. But we must remain focussed.

"Since my childhood in France, we grew up knowing of Ronaldinho and Ronaldo and Brazil's Joga Bonito ['beautiful game'] - and that is still the case. They have good players, good with the ball such as Vinicius Jr. and Neymar. That's a great and difficult challenge for any opponent." 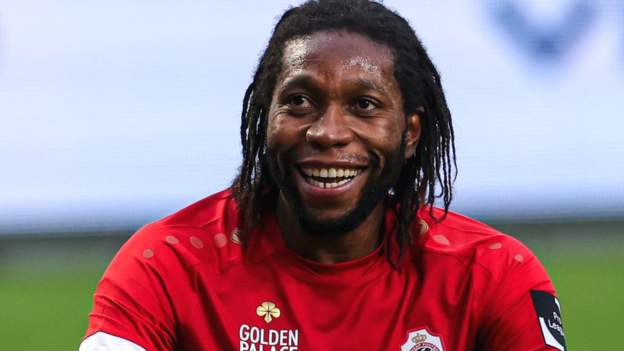