Moroccans raise placards as they gather in front of parliament in the capital Rabat to protest against rising prices, on February 20, 2022.   -

Thousands of Moroccans staged nationwide protests Sunday to complain about the soaring prices of fuel and other essential commodities.

In the capital of Rabat and other cities throughout the Kingdom,thousands of Moroccans rallied on Sunday. They all protested the soaring cost of living.

The Northern African state is one of the latest countries hit by a surge in global energy prices, which are driving inflation numbers at decades-high levels.

The demonstrations coincided with the 11th anniversary of the wave of protests known as the Feb. 20 movement inspired by the 2011 Arab Spring. For Abdelhamid Amine, the head of the Moroccan Democratic Front, the Feb.20 movement remains today a source of inspiration: "We must resist tyranny and corruption, promote the slogan "Get rid of this police state", and build democracy under the slogan of dignity, freedom, equality and social justice. The February 20 Movement must continue to free our country of injustice and tyranny. We must strive for dignity and social justice."

Human rights activist, Abderrazek Boughanbour, thinks, "The state is engaging in a power struggle with Moroccan men and women" which "has affected their livelihoods". Adding, "we say to the Moroccan state: Stop the unpopular policy, which targets the pockets of Moroccans."

The government blamed the spike in prices of basic goods the global post-pandemic economic recovery, the increase in prices of grains and oil products on international markets as well as the worst drought the country has experienced in decades.

On Thursday, the minister delegate, Fouzi Lekjaa, in charge of the budget noted the government had allocated funds to supporting the agricultural sector in addition to measures aimed at alleviating the strain on Moroccan households. He still acknowledged the efforts remained “insufficient" for addressing the crisis. 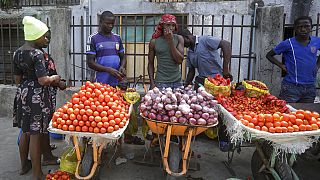