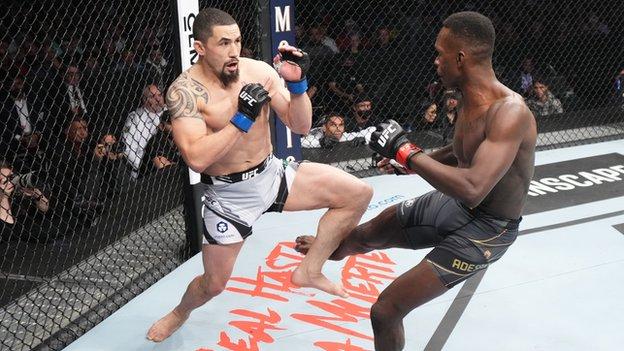 New Zealand-based Nigerian Adesanya previously knocked out Whittaker in the second round at UFC 243 in October 2019 to capture the undisputed middleweight title in Melbourne.

But in Saturday's rematch at UFC 271 in Texas, Whittaker fought to a much more conservative gameplan, which kept him in the contest all the way to the judges' scorecards.

After their tightly-contested title bout at the Toyota Center went the distance, all three judges were in agreement on the victor and Adesanya was awarded the unanimous decision with scores of 48-47, 48-47, 49-46.

Adesanya, 32, dropped Whittaker, 31, with a straight shot in the opening minutes of the bout, and the challenger cut a somewhat demoralised figure on his stool after the first round as he told his corner how much trouble the champion's leg kicks had already caused him.

But for the remainder of the bout Whittaker looked to keep Adesanya guessing as he worked behind a well-drilled double jab and mixed in takedown attempts to keep himself in contention.

However, it was Adesanya's cleaner striking from range that proved crucial as he hammered the challenger's legs with kicks throughout the contest and effectively nullified Whittaker's offence on the ground to improve his record to 21-1 and extend his undefeated run as a middleweight.

"I knew he was going to bring everything, because last time I took everything away from him," Adesanya told former UFC champion Daniel Cormier during his post-fight interview.

Adesanya went on to state his intention to return to action in June against middleweight contender Jared Cannonier, who scored an impressive win of his own in Houston.

"I know June doesn't have a pay-per-view yet, but like I said, I'm the new dog in the yard, I'm the big dog in the yard now. And I know the other dog, Jared Cannonier, did some work tonight."

"I know I started off rocky in that first round, but I feel like I took every round after that," he said.

"It is what it is, but you know what they say about leaving it to the judges.

"I'm happy that I fought my heart out and left it here. But, I'm gutted. I thought I did enough. I thought I took that."

Both men entered the octagon with renowned knockout records, but it was number 11-ranked Tuivasa, 28, who scored the upset victory over number three-ranked Lewis, 37, with a knockout that had the fans on their feet.

During a wild exchange early in the second round, Tuivasa hit the target with a pair of huge elbows, with the second connection sending hometown hero Lewis crashing face-first to the canvas at the one minute 40 seconds mark to hand the Western Sydney native the biggest victory of his MMA career.

The win also extended Tuivasa's remarkable run of form to five wins, with all five of those victories coming via knockout.

But this most recent finish was particularly special as it came against the man who holds the all-time UFC knockout record.

"That's the king of knockouts. Much respect to Derrick," said Tuivasa after his victory, before announcing his arrival as a legitimate title threat.

Jared Cannonier cemented his position as the next contender to challenge for the middleweight title with a stunning come-from-behind win over fellow contender Derek Brunson.

Brunson, 38, dominated the first round, scoring multiple takedowns, then dropping Cannonier, 37, in the closing seconds of round one and almost finishing him with a rear-naked choke as the horn sounded to end the round.

But when the fighters returned for the second round, it was Cannonier who looked the fresher man and, after fending off Brunson's takedown attempts, 'The Killer Gorilla' struck back.

Cannonier connected with a short elbow, followed by a backfist that badly rocked Brunson. Then, after he took his man to the mat, a succession of elbows knocked Brunson out and forced the stoppage at the 4:29 minute mark.

"It wasn't just the elbow, it was that nice little backhand," he said.

"I keep telling people, 'You get in my face with that disrespect, you're gonna catch the backhand. You come running up in my face, I'm gonna bust you in yours,' and that's exactly what I did.

"I turned 'Blonde Brunson' into 'Blood Brunson,' just like I said I was gonna do. It went down in H-Town, you know what I'm saying?!"

He also made sure UFC president Dana White was left in no doubt about what he wants next.

"I want to say this while looking Dana in his eye," he said as he shouted at cage-side fans to make sure White had his full attention.

Earlier in the evening, Scottish-Australian flyweight Casey O'Neill extended her perfect professional record with a split-decision victory over the retiring Roxanne Modafferi.

Las Vegas veteran Modafferi, 39, had announced prior to the event that her 50th career bout would be the final fight of her MMA career.

But O'Neill, 24, had no time for sentimentality as she landed 174 significant strikes across the three-round bout to earn the victory and continue her impressive run since joining the UFC.

"It's clear to me and to everyone that Roxanne put everything she had left into that camp, so it was great to go out there and have a war with her," said O'Neill after her victory.

"She deserves all the good things after this, in whatever she wants to do."

An emotional Modafferi said she was satisfied with her performance in defeat as she officially called time on her MMA career.

"I'm OK with that last fight," she said.

"I gave everything that I had, and it's time for me to pass the torch to the next generation.

"I'm proud of myself and, even if you don't win every time you can still have an amazing time. I've had an amazing life journey."