Nigeria's Okoye: 'They found it impossible to believe I had talent' 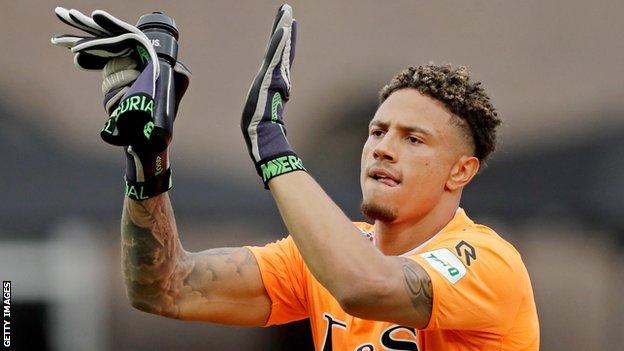 Maduka Okoye is hoping that October's back-to-back 2022 World Cup qualifiers against Central African Republic will help him to cement his role as Nigeria's first-choice goalkeeper and win over his doubters.

The Sparta Rotterdam stopper, 22, has started five of the Super Eagles' seven games this year, to take his total to 10 caps since his debut in 2019.

Germany-born Okoye has been on Nigeria coach Gernot Rohr's radar since playing in Germany with Fortuna Düsseldorf's under-19 team, and he is aware that some fans and media initially questioned his credentials.

"In the beginning, they (the critics) doubted me a lot," he told BBC Sport Africa. "When I played in the German lower leagues, they found it impossible to believe I had talent.

"Now there are fewer doubters; the higher you play at club level, the more they will respect you."

After some fine displays in the Dutch Eredivisie, Okoye believes he is gradually winning people over even if he knows he still has much to do.

"I've experienced for myself that playing for a club and then for your country is a whole other thing. I don't see myself as the Nigeria's number one yet, I have to work on a lot of things before I will be the undisputed number one."

His 2019 debut was in a friendly against Brazil and saw him come on a substitute, while still playing for Fortuna Düsseldorf's second team, to face Gabriel Jesus, Richarlison and others.

"It felt almost unreal. We played a match in Singapore against Brazil, which was part of their friendly tour," he said.

"Francis Uzoho got injured so I had to do a quick warm-up together with the other reserve keeper, Ikechukwu Ezenwa. It was either him or me.

"I had to go for it, but I was nervous at first, and there were a lot of things going through my mind. However, as soon as I set foot on the field, it was like any other match."

He passed it with flying colours, conceding no goals as the game ended 1-1, the score when he came on with just under half an hour to play.

Okoye had come to Rohr's attention through Fortuna's then managing director of sport Lutz Pfannenstiel, who is not only a former professional goalkeeper but also has extensive links with Africa.

His success with Fortuna II secured a move to Dutch top-flight side Sparta Rotterdam in 2020 and at the end of his first full season, he was voted the fans' Player of the Season.

Now he is hoping he can earn similar support from the Nigeria fans, believing the upcoming 2022 World Cup qualifiers and January's Africa Cup of Nations finals will give him that chance.

"We have to do our job and qualify," he added. "I take everything step-by-step and continue my hard work for Nigeria and enjoy every single minute on the pitch with the support of our fans.

"These tournaments are going to be a huge platform for players like me. My ultimate goal is to hopefully play in the Premier League.

"The most important thing for me now is that I can play my games as a number one and develop myself as a keeper, and that is something I can do in the Eredivisie at Sparta Rotterdam."

On Thursday, Nigeria - who lead Group C with six points from two games - host Central African Republic in Lagos before facing the same side again on Sunday.

Christian Atsu: Ghana star 'removed from wreckage with injuries' after...