Nigerian basketball: From beating USA to begging for Olympic kit

Nigeria men's basketball team may be celebrating two big wins in three days in pre-Olympic matches, but the team could be without their official kit for the Tokyo Games.

On Saturday, the 2015 African champions stunned the USA with an historic 90-87 victory in Las Vegas before then sealing, on Monday, a big 94-71 win over Argentina, the world's fourth-ranked side.

The team's performances have excited fans ahead of their 19 July departure for Japan but 'D'Tigers' look set to be leaving without their Olympic kits.

These are currently stuck with Nigeria's Customs Services.

Faced with thousands of dollars in customs duty, the cash-strapped Nigeria Basketball Federation (NBBF) say it is applying for a waiver so they can pick up the kits donated by their China-based sponsors.

"There was a bit of delay in documentation to get a waiver because it is between two ministries," NBBF vice-president Babatunde Ogunade told BBC Sport Africa.

"It's something that should have been done before now, but they are still on it. It's basically a delay in communication and documentation."

It is not the first time Nigerian Olympians will be faced with kit challenges at sport's biggest event.

Back in 2016, Nigerian athletes in Rio only received their Olympic kits on day 13 of the Games - after most of them had finished competing.

But Ogunade is confident that D'Tigers, who are camping in the United States, will compete in the kit at the delayed Olympics.

"The goods came a while ago. But the team will depart for Tokyo on 19 July," he added. "I believe they will get it before the games." 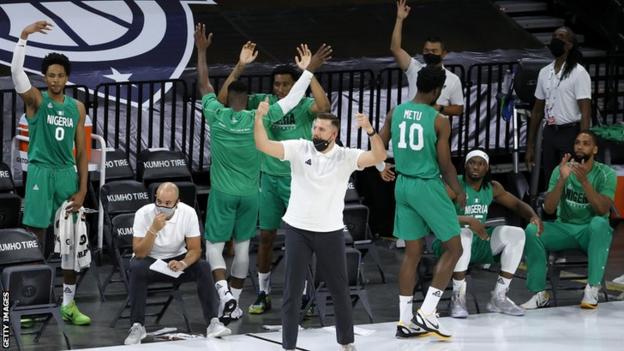 With six NBA players and former NBA head coach Mike Brown at the helm, Nigeria became the first African nation to beat the US, who were playing the first of five tune-up games before Tokyo.

The US have won the last three Olympic men's basketball titles.

"At the end of the day, it doesn't mean much in the standings as far as where we're trying to get to," says Nigeria coach Brown.

"But it's a good win for us. No African team has been able to beat USA Basketball in an exhibition game or a real game. We're trying to get a little bit of momentum for Nigeria and for the continent of Africa."

It is a remarkable rise for the West African nation, struggling with a crippled domestic league following a leadership crisis.

But the country has turned to overseas-born players and a strong community of diaspora players based in the United States for both its men and women's teams.

This has led to continental success (African Basketball Championship) for the male side in 2015 and to back-to-back triumphs for the women's team in 2017 and 2019.

Nigeria had 12 NBA players in their 49-man training camp in California and seven in uniform on Saturday against a US side replete with NBA players.

Argentina had beaten Nigeria 93-79 at the London Games and hammered them 94-66 four years later in Rio.

But on Monday, D'Tigers gained another measure of revenge by beating the South Americans 94-71.

"The fact that we are playing well in these games can lift the spirits of a lot of people, not only in Nigeria, but also in the African continent," Brown added.

"Also, there are a lot of black people in the world, especially in the diaspora, who identify with the African continent, and so it can help to uplift, unite and connect an entire group."