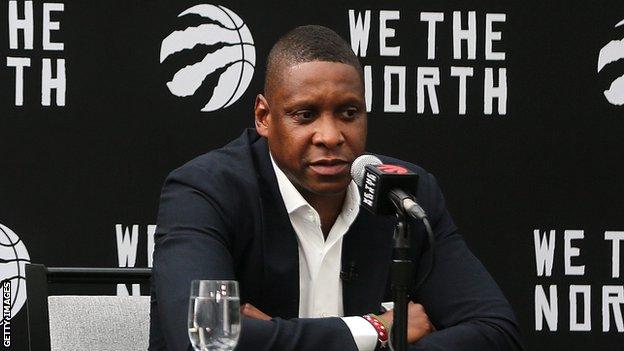 The vice-president of the Nigerian Basketball Federation (NBBF) says the head of the 2019 NBA champions was "misinformed" when he accused the body of robbing the nation's youth of basketball and tearing the sport apart.

Toronto Raptors president Masai Ujiri expressed his feelings earlier this month in an open letter published days after it was confirmed that Nigeria will miss the Women's Basketball World Cup.

Mali have replaced Nigeria at the tournament in Australia later this year after the Nigerian government's decision in May to withdraw from international basketball for two years.

"If Masai had all the facts, he would not make such conclusions," Ogunade told BBC Sport Africa. "I communicate regularly with Masai, it is possible he has been misinformed. Mr Ujiri is entitled to his opinion."

"The Minister and his co-travellers in the Ministry [of Sports] are the ones manufacturing the crisis."

In response, the ministry has said that the decision to pull out of international basketball came from Nigeria President Muhammadu Buhari himself.

In his letter of 5 June, Nigerian-Canadian Ujiri had stated that "enough is enough".

"From the Ministry of Sports to the Nigerian Basketball Federation (NBBF), the leaders of the basketball ecosystem in Nigeria continue to rob our youth of their present and future while tearing the entire basketball community apart - this needs to stop," he wrote.

"This (withdrawal) is a symptom of an issue that has permeated the sports ecosystem for years.

"When leaders put self interest over national interest, the innocent suffer. It's time for them to step aside, for the good of the game, the nation, and the athletes."

When asked to respond to the NBBF's claim that the sports ministry was to blame, a special adviser to the Minister of Sports Sunday Dare said the decision about withdrawing ultimately lay with President Buhari.

"The Minister did not give an instruction on his own," Toyin Ibitoye said.

"The instruction is from the President and facts were presented before that decision was taken."

Basketball's world governing body Fiba has already pointed out that the impact of the withdrawal will last even longer than the initial two years.

Nigeria 'has to be nationalistic' in approach

Ujiri claimed that Nigeria is stuck in a damaging cycle, failing to invest properly to allow its sides to perform on the international stage.

Players from D'Tigress, the women's national side, have been locked in a dispute with the NBBF and sports ministry over the non-payment of bonuses and organisational issues encountered during the Olympics Games in Japan.

"Nigeria has traditionally treated sports as purely recreational, not for what it is - a serious business and a tool for nation-building and economic transformation," Ujiri, 51, said.

"But we all know the drill; a tournament is coming, we hear there is no money, people scramble to put money together. Tournament commences and athletes are treated carelessly. Tournament ends, athletes are angry, government releases money at a later date.

"No accountability or transparency on how much was released and how it was spent. And the truth is that we're not just speaking about basketball here.

However, Ibitoye, the special advisor to Dare, argued the Ministry of Sports was taking a holistic approach to improve the standard of basketball in the country.

"We have to be nationalistic in our thinking, of the game in Nigeria as a whole," he said.

"It may be doing well in international competitions, but you ask yourself, at what cost?

"It is important for us to focus on the development of the game at home, create an environment that will make it to thrive so that your child and my child in Nigeria can aspire to the top.

Ujiri believes that it is not just Nigeria that will suffer from the country's withdrawal, but the global basketball community as well.

"We all know Nigeria is teeming with talent. The country has made leaps and bounds in basketball and has risen to the top," he added.

"The opening of an NBA office in Nigeria further signifies the country's importance in the global basketball ecosystem.

"Even international governing sports body Fiba has openly acknowledged its importance on the global sports scene, yet at times, they have stood on the sidelines making a mockery of the situation. Fiba Africa has also contributed to this drama."

Fiba Africa did not have a comment in reply to the statement by Ujiri, who also said administrators around Africa do not have the the necessary passion and understanding of the sports they are running.

"Individuals don't understand what it means to play for the team," he explained.

"This will drive patriotic Nigerian athletes to play for other countries. It's not right. It's not fair."

The government withdrawal from all international basketball came after a protracted leadership crisis for control of the NBBF.

The problems began in 2017 when Musa Kida and then-incumbent Tijani Umar emerged as leaders of two factions claiming control of the NBBF after two separate elections.

Issues have continued despite Kida being re-elected as NBBF president in January, a result which was ratified by Fiba in March.

Ujiri says the only way for things to change in Nigeria is for those in power and those claiming to be in power to quit.

"It's time for us to move forward. We need a new slate and a new narrative," he urged.

"To do this, all of the leaders that have held on to the realms of the Nigerian Basketball Federation for the past several years must all step down." 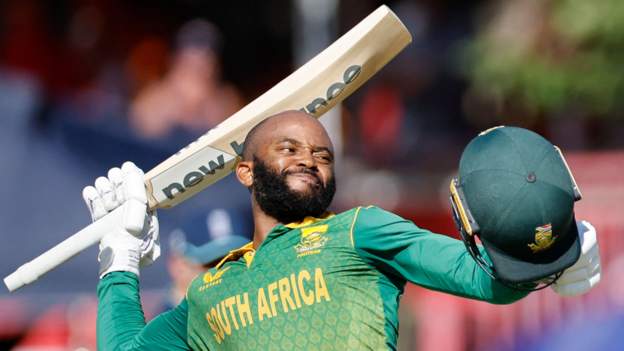