As Welsh coach Osian Roberts steps down from his post as Moroccan football's director for family reasons he says the Atlas Lions can be in the world's top twenty.

The 57-year-old is leaving the post two years into his original five-year deal and is confident he leaves the Morocco Football Federation (FRMF) in a better position than when he arrived.

"I am optimistic for football in FRMF. I believe it could be a football nation among the top 20 in the world," he insisted to BBC Sport Africa.

"I have put a foundation in place... but there is a lot of work still to do."

Roberts reiterated that he has enjoyed his time working in Morocco after leaving the Football Association of Wales set-up in 2019, where he had as assistant manager to Gary Speed, Chris Coleman and Ryan Giggs.

"My two years in Morocco has been an incredible experience in a beautiful country with lovely people and I have great friends here," he added.

"I leave with many happy memories." 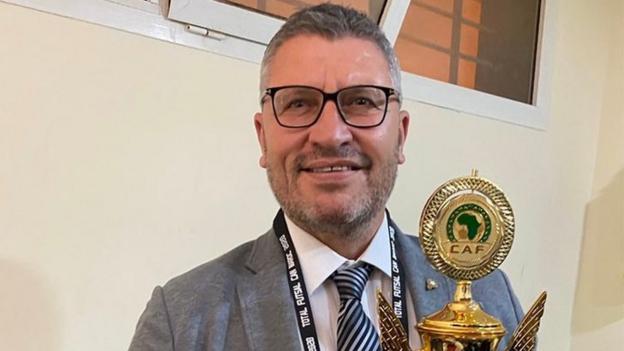 He is also proud of Morocco's footballing achievements during his stint as technical director - the highlight of which was retaining the African Nations Championship (CHAN) earlier this year in Cameroon.

There could have been even more success as if the 2021 Under-17 Africa Cup of Nations, which Morocco was due to host, had not been cancelled due to the global Covid-19 pandemic.

Roberts also points to the things he has accomplished behind the scenes while working with the FRMF especially on the course for coaches seeking Confederation of African Football (Caf) recognised licenses.

"Morocco was the first African nation to be accepted into Caf Coaching Convention following official evaluation of the A Licence courses we run," he said.

"Our Caf Pro Licence courses continued to be formulated and will be finalised in September 2021 despite being laid due to Covid-19) and we have started the 1st ever African Caf B Fast Track courses for ex-internationals.

"I also created new and specific courses for the Botola Pro (Moroccan league) youth coaches and technical directors to help implement an overall philosophy within the clubs to help transition of players from clubs to national teams."

Roberts admitted he was not sure what will be next for him simply saying: "In football you never know."