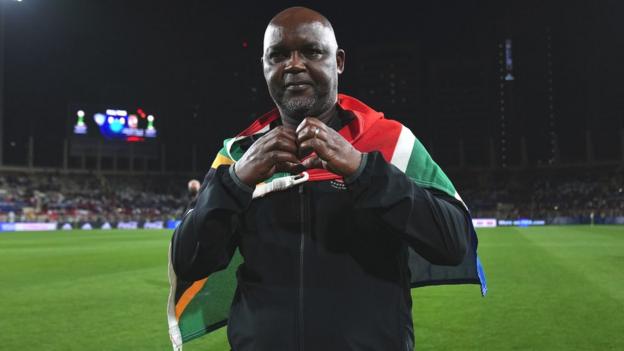 South African Pitso Mosimane says he can help Al-Ahli SC return to the Saudi Arabian top flight with the help of the ambitious owners after agreeing a two-year deal.

The continent's most decorated club coach told BBC Sport Africa he had been waiting 'for the right project' after leaving African giants Al Ahly, with whom he won two African Champions League titles, in June.

Having rejected offers from top clubs and national teams, Mosimane is determined to help the three-time domestic champions return to the Saudi Pro league.

"Because of the status of the club and the ambitious owners, it's undoubtedly one of the biggest tasks in my coaching career to date," Mosimane told BBC Sport Africa.

Founded in 1937, the kingdom's second oldest club is one of the founding members of the Saudi Pro League and part of the traditional "big four" alongside Al Ittihad, Al Hilal and Al Nasser.

But despite boasting 28 titles in all competitions in its 85-year history, Al-Ahli suffered a first relegation at the end of last season.

"With a large fan base in Saudi and a cabinet filled with 28 trophies, the club is more than ready to make its way back into the Pro League to face their founding 'big four' rivals," said Mosimane.

"We are ready to give our all to make it happen."

The former South Africa and Mamelodi Sundowns coach is still in Johannesburg however as he awaits paperwork to travel to Saudi Arabia.

"We are waiting for approval of the visas," Mosimane's agent Moira Tlhagale told BBC Sport Africa. "As soon as it arrives, we will be going."

The expectation is that the documentation will arrive in time for the coach to be on the Al-Ahli bench when the team next plays in early October.

'We need to awaken the sleeping giant'

Mosimane is one of the continent's most respected managers, but his coaching job in Saudi Arabia is his first outside Africa.

His haul of three continental trophies with Al Ahly included the Caf Super Cup which he landed last December.

During his time in South Africa, Mosimane also won the 2016 African Champions League title with Mamelodi Sundowns, which earned him the best African Club Coach of the Year award in 2016.

The former Bafana Bafana midfielder's managerial career - one that has taken him the length of the continent, from SuperSport United to Al Ahly via Sundowns - has delivered a combined 21 titles across three clubs.

Along with his technical team of Kabelo Rangoaga, Musi Matlaba and Kyle Solomon, Mosimane is conscious that patience will be required for any hopes of repeating major titles and continental trophies given Al-Ahli's current status.

"The plan was to only take on an interesting and challenging project that will enable us to impact and turn a team into champions," Mosimane said after his appointment.

"We need to awaken the sleeping giant and bring the people back to fill the stadium. It's a very big task but an exciting one, too."