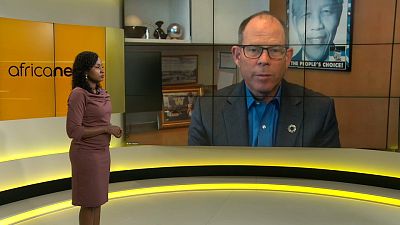 The soaring prices of wheat due to the Russia-Ukraine conflict are set to harshly hit Africa. As consequences of the conflict in Europe progressively become known, the Bill & Melinda Gates Foundation together with the Qatar Fund for Development (QFFD), announced a 200 million $ partnership on agriculture and climate adaptation. Mark Suzman, the organisation’s Chief Executive Officer highlights for Africanews the work being done to solve some of the world’s most pressing challenges including the war in Ukraine, the COVID-19 recovery plan and work being done to prevent climate change from becoming the next ‘pandemic’.

Over 1.8 million Ukrainian refugees have fled into Poland and Bill Gates has appealed for support to the United Nations Refugee Agency. He is not alone in expressing concern at the sheer magnitude and absurdity of the collateral damage in this conflict. Beyond the political and economic solutions like dialogue and sanctions advanced to end this conflict, what can be done to prevent such humanitarian crises in the future?

Our primary focuses are in areas of the world like sub-Saharan Africa and South Asia, where we have greater challenges of poverty and lack of opportunity. And in this context, you know, in addition to the direct humanitarian crisis, what you talked about, the collateral damage, which we are just starting to see in terms of rocketing food prices for staples of wheat and need, but also prices of fertiliser. Russia and Ukraine are big exporters of fertiliser, and there is a huge dependency for agricultural prices to be going forward. So this is likely to affect the next cycle of farming across Africa. And so we are looking at ways in which both either direct ways in which we can help work with governments and others to prepare for the shock which is already underway, but also make sure there are safety nets and payments for vulnerable communities in dealing with it, because it is a great example of the wider knock on effects of what is a direct tragedy and how it can have a global impact on the world's poorest.

Considering how the world has previously struggled to meet climate change mitigation targets whether it is cutting greenhouse emissions or financing adaptation measures in vulnerable communities, what needs to be done to reverse this trend and prevent the next crisis?

The Bill and Melinda Gates Foundation, we are much more focused on what is known as climate change adaptation, which is trying to help those most affected already by climate change, which is already a reality, particularly for those smallholder farmers in sub-Saharan Africa and South Asia who depend on the land, depend on agriculture for income and nutrition, and are already seeing much more frequent floods. Droughts, heat, extreme heat, extreme cold. All of which has a devastating impact. And so in terms of adaptation, what we do and focus on at the foundation is both interventions that can take place now that can help those farmers get better droughts resistant.

Can you get more drought and flood resistant crops and seeds? Can you have livestock that is more likely to survive adversarial conditions like drought? And one of the steps that we will be taking with the Qatar development funds around how we can support some of those new climate adaptation efforts, including an initial set of investments in just as an example of something called dual use poultry, which are poultry chickens that are bred to survive much more in some of the challenging African conditions and can be used for both eggs and meat. And so can become a source both of direct nutrition and income generation. And it's a project we've already piloted at the Gates Foundation in Ethiopia and Nigeria. We know it works and we're looking forward to scaling it up, but that's a kind of example.