Poaching of rhinos has resumed in South Africa, with a total of 451 animals killed in 2021, although this figure is still 24% lower than in 2019, before the pandemic, the South African Department of the Environment warned on Tuesday.

Of this total, 327 animals were killed in national parks and government reserves, and 124 in private game reserves, the statement said.

The country is home to nearly 80% of the world's rhinos. They are hunted to meet the high demand for their horns in Asia, where they are used in traditional medicine or for their alleged aphrodisiac properties.

Last year, poaching declined in national parks, including the huge and iconic Kruger Park in the northeast, with 209 animals killed compared to 247 the previous year, but increased sharply in private reserves.

Better protection of rhinos in the Kruger, thanks to "intensified anti-poaching activities", has led criminals to "look for easy prey in other areas, which has led them to target private reserves", the ministry says.

National parks and private reserves work together to protect their white and black rhinos, including removing their horns to discourage poachers.

The southern white rhino, one of two subspecies of white rhino, is now considered endangered with about 20,000 individuals according to the World Wildlife Fund (WWF).

And according to the International Union for Conservation of Nature (IUCN), there are only about 5,000 black rhinos left in the wild, making them one of the most endangered animals in the world. 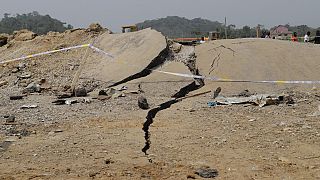