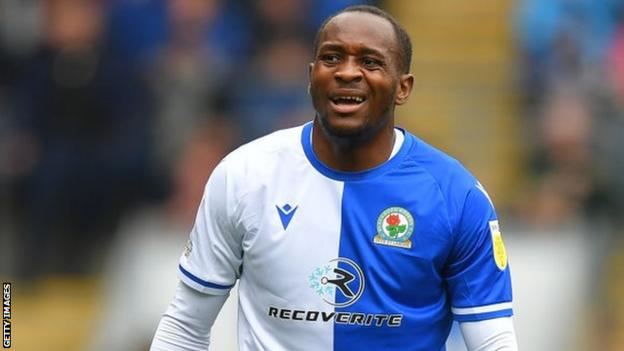 Blackburn Rovers defender Ryan Nyambe may only be 23 years old but he has already founded his own clothing brand and, more recently, launched a football academy in his native Namibia.

It is a project that he is hoping will unearth talent in his homeland and encourage English clubs to take a chance on young Namibian players.

Born in Katima Mulilo, a town on the banks of the Zambezi, Nyambe now plies his trade in the English Championship at a stadium beside the somewhat calmer waters of the River Darwen.

His road from southern Africa to north west England was made possible by his mother's determination to move to Manchester when he was a child. It is a decision for which he is still grateful today.

"Honestly, if my mum had not taken that step I do not know what my life would look like now," Nyambe tells BBC Sport Africa.

"I'd still be in Namibia and I certainly wouldn't be playing for a big Championship club.

"She left me at home with my aunty and grandma for a while and when she got a job she brought me over when I was 10.

"I always say I didn't get to where I am now by myself, I owe so much to my parents and to the coaches here at Blackburn.

"I've had some big help in my life - I've been taught and nurtured well. That's why I set up the academy, to give back to my country and give opportunities to kids there because at the moment they don't have many." 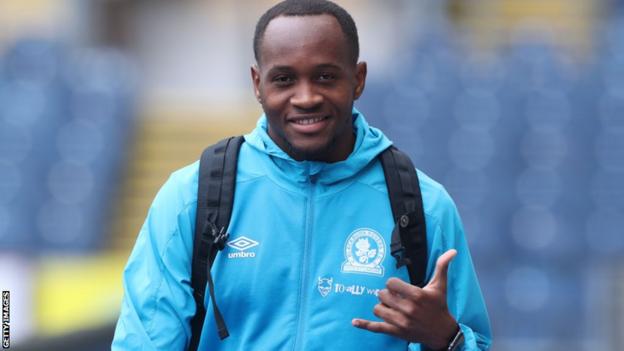 Nyambe has been at Blackburn for the past decade, joining the academy at 13 and making his first-team debut at 17.

Now entering his sixth season as a first-team regular, the Namibian wants to provide a pathway for his compatriots into professional football in England.

"There is genuine talent in Namibia but it is just not well exposed and at the moment it is going to waste," Nyambe explains.

"This summer I saw kids in Namibia who were super talented and who, if they had grown up in a different country, would make it as footballers.

"I want to open doors for them and while it's not going to be easy, I do want to try. Ideally I'd love to bring a couple of the kids over to England to train and you never know what might happen if they impress.

"Blackburn have been really supportive of what I'm doing and the academy manager has said he'll give me any help and advice I need. I really appreciate that."

Sometimes it only takes one big-name player to boost the football prospects of a country, with the likes of Kenya's Victor Wanyama, Tanzania's Ally Samatta and Central African Republic's Geoffrey Kondogbia proving as much in recent years.

Nyambe is aiming to play that role for Namibia.

"I hope I can be that player to put Namibian football on the map. My goal is to play in the Premier League, to be at the highest level," he insisted.

"If I reach the Premier League I hope I can then open more doors for other players. That's what I want. This isn't just about me.

"I want to show people back home that it's possible and to be that player who Namibian people look up to."

Playing for Namibia has given Nyambe the opportunity to test himself against some of Africa's best, including facing Hakim Ziyech and Wilfried Zaha at the 2019 Africa Cup of Nations.

In World Cup qualifying this year the Blackburn defender, as well as facing Congo Brazzaville and Togo, is set to line-up against Senegal and the likes of Sadio Mane. He cannot wait.

"Playing against players like that is what you want in your life so you can see what level you are at so it will definitely be exciting," Nyambe said.

"It's difficult to plan out how to keep Sadio Mane quiet but to be fair we played Liverpool in a pre-season friendly last year with Blackburn and I thought I did okay against him.

"Obviously his quality always shines through and I know he'll be a tough opponent but I like a challenge and I love playing against world class players - hopefully I can stop him scoring."

Nyambe strikes an optimistic tone when asked about Namibia's prospects.

"Reaching the World Cup is our aim from the start, it has to be. Obviously we know we are underdogs of the group and we need do a lot of work. We know they all have quality players but we never doubt ourselves.

"There are good players in our team too. We have people like Peter Shalulile and Deon Hotto who play in South Africa. The quality is there and we have to have belief we can compete."