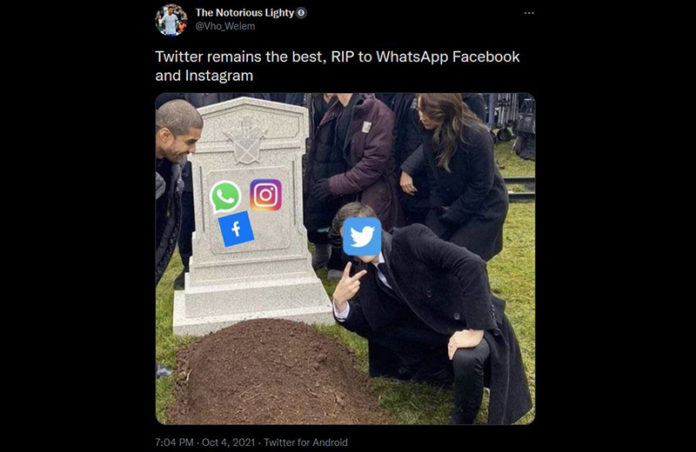 Last evening, millions of people across Africa went to their usual social media platforms only to have their apps load endlessly. Was it the signal? Did they steal the tower cables? No — Facebook and its platforms, including some of the biggest social media apps on Earth, WhatsApp and Instagram, were offline due to a “faulty configuration change.”

Needless to say, people from across the continent (and the world) descended to remaining social platforms, including, most-notably, Twitter.

In February, Twitter had 353-million monthly active users. A number that is only increasing year over year. A notable feature of Twitter, one which has spurred its worldwide popularity, is the infinite nature of its communications. People on Twitter can talk about anything as long as it doesn’t harm other users, and Twitter will promote these conversations via its trends tab. Even if the conversation is about rival social media platforms.

Across South Africa, Kenya and Nigeria, the number 1 trend on the platform since last night is “WhatsApp,” followed closely by #FacebookDown.

Most reactions from users have been comedy-minded. While Mark Zuckerberg lost billions during the outages of his social platforms, for most users the downed apps present minor annoyances.

Since WhatsApp is not working I've lost 3 of 5 relationships pic.twitter.com/6DSbSYpv5m

Not whatsapp crushing after I just bought my whatsapp data pic.twitter.com/g0dFu1MpC3

Safaricom: you have successfully purchased 10 Gb for…

A few users have seemingly made up their mind and will be switching preferred sites.

With Whatsapp down, I guess this is the right moment to be a permanent resident of Twitter pic.twitter.com/AXULv4uRVS

What did you do to pass time during the shutdown?#InternetShutDown #facebookdown #whatsappdown #WhatsApp #instagramdown pic.twitter.com/EZP6tvjCS0

Interestingly, some users tweeted that they would be switching to WhatsApp rival, Telegram.

According to Bloomberg, Telegram and another private messaging app, Signal, saw downloads and user sign-ups explode during the roughly 6 hours that the Facebook group of apps were down.

Telegram managed to top the US iPhone download charts in just a few hours as WhatsApp was inoperable.

Telegram poked fun at the whole debacle on its official Twitter account. The app was “doing its own thing” last night.

“Telegram” is currently one of the top trends in Nigeria, a country where users have to turn to VPNs to use Twitter due to the government imposed ban of the service.