England's hopes of defending the Women's World Cup are hanging by a thread after an agonising three-wicket defeat by South Africa in Mount Maunganui.

With three defeats from as many games, England are not yet eliminated, but will need to win all of their remaining four matches and hope other results go their way to reach the semi-finals.

Taken to 235-9 by half-centuries from Tammy Beaumont and Amy Jones, England were once again blighted by a raft of missed chances in the field.

After she fell, Marizanne Kapp, who earlier took 5-45, inched South Africa closer in the face of some magical bowling from Sophie Ecclestone.

Kapp was out for 32 in the penultimate over, leaving the Proteas four to get from the final set.

Shabnim Ismail swung Nat Sciver over the leg side to give South Africa their first World Cup win over England in 22 years.

England play India at the same venue on Wednesday, when another defeat will effectively end their campaign.

In Monday's other game, tournament debutants Bangladesh earned their first World Cup win in a nine-run defeat of Pakistan. 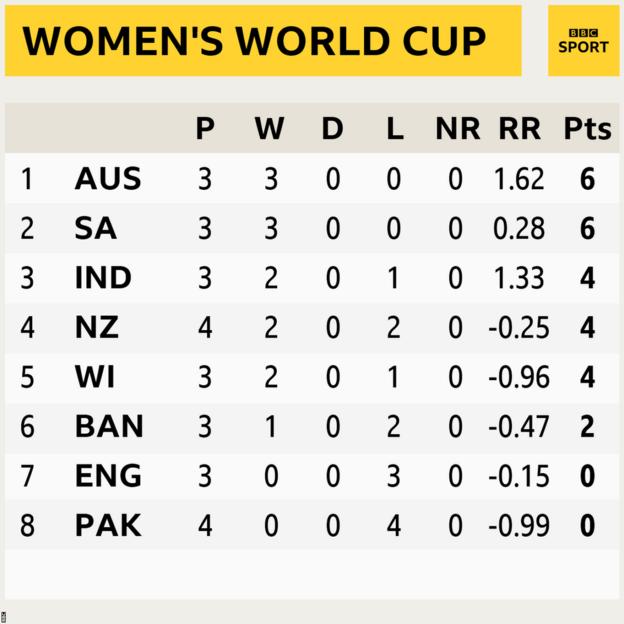 England paid for errors of their own making in tight losses to Australia and West Indies. Given the stakes, the mistakes made at the Bay Oval were more costly, the defeat more painful.

Replacing Lauren Winfield-Hill with Danni Wyatt did not bring an improvement at the top of the order. Wyatt slashed Kapp to point, Heather Knight misjudged to play on off the same bowler and, when Nat Sciver somehow pulled to slip, England were 42-3.

Beaumont, with 62, and Jones, who made 53, bravely rebuilt but even their dismissals - Beaumont playing across the line and Jones run out by Sophia Dunkley's poor call - were needless.

England scrapped to a total they could have defended, only for chance after chance to go begging in the field.

Beaumont dropped Wolvaardt at point on four, Kate Cross reprieved the same batter off her own bowling on 23 and running back at mid-off on 62. In between, Jones missed a simple stumping.

All the while, England had a trump card in left-arm spinner Ecclestone, who bowled a magnificent spell of 1-23 on the worn pitch.

South Africa saw off her final over, the 48th, leaving 11 needed from two. When Anya Shrubsole pinned Kapp lbw in the 49th, there was hope, but Sciver could not hold her line when bowling the final set.

In becoming the first one-day World Cup holders, women or men, to lose their first three games, England are on the brink of a calamitous exit.

All-round Kapp wins it for Proteas

South Africa are on track for the semis after their third win from as many games, with this one coming thanks to the all-round display of the brilliant Kapp.

The seamer bowled an immaculate line with the new ball, then used clever variations at the death for the tournament's first five-wicket haul. She even provided the throw for the run-out of Jones.

The elegant Wolvaardt took advantage of England's errors to add 56 with Tazmin Brits and 67 with captain Sune Luus.

After South Africa lost three wickets for 22 runs, Kapp, who overturned being given lbw on nine, repelled Ecclestone in a partnership of 30 with Chloe Tryon.

Then, after Tryon was run-out backing up, Kapp struck a crucial six off a Katherine Brunt full toss in the 46th over.

Though she could not see the job through, she had done enough for South Africa to pull off their highest successful chase in a World Cup match.

'We have made history today' - what they said

South Africa captain Sune Luus: "Regardless of what happens in the rest of the tournament, we have made history today and nothing is going to change that. I think everyone in South Africa is very proud of us and we can be proud of ourselves too."

England captain Heather Knight on Sky Sports: "It puts us in a tough position. I'll be honest, it's painful losing three close games in a row.

"At times we shot ourselves in the foot with our fielding. You can't give a player like Laura Wolvaardt that many chances, because she will make you pay."