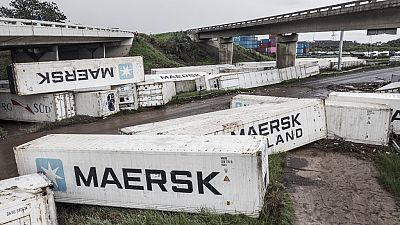 A general view of containers that fell over at a container storage facility following heavy rains and winds in Durban, on April 13, 2022. Devastating floods killed 259 in the   -

The country's public enterprises minister, Pravin Gordhan announced on Tuesday (April 19) adding that a backlog of thousands of containers will be cleared within five to six days.

The floods caused extensive damage to roads leading to Durban port, one of the busiest shipping terminals in Africa and a key hub for exports like metals and agricultural commodities.

In an online briefing the minister said, fridges, logs and debris ended up in the harbour during the floods, but were all cleared after 72 hours of dredging.

He said that trucks could now access the port terminals, which were operating at between 60 per cent and 100 per cent capacity.

Trade and Industry Minister Ebrahim Patel said that problems with the movement of goods were shifting from the Durban port, where there had been considerable progress, to the logistics of moving cargo to Gauteng province.

President Cyril Ramaphosa invoked the importance of the Durban port to the country's economy as a whole in an address to the nation on Monday, when he announced that his Cabinet had declared a national state of disaster to respond to the crisis.

The floods, among the worst to have affected KwaZulu-Natal province in its recorded history, have killed 443, and displaced thousands, according to the latest report by the AFP