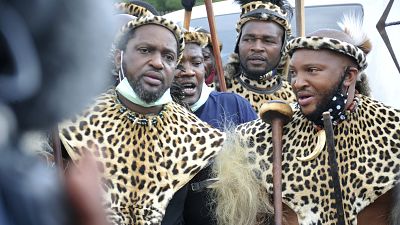 Prince Misuzulu Zulu, left, flanked by fellow warriors in traditional dress at the KwaKhangelamankengane Royal Palace, during a ceremony, in Nongoma, Friday May 7, 2021.   -

The king of South Africa's Zulu community, the country's largest ethnic group, on Wednesday called for an end to unrest after six days of looting left scores of dead and battered the economy.

"I call for peace," Misuzulu Zulu said on state television. The violence "has brought great shame on all of us," he said, adding "this chaos is destroying the economy, and it is the poor who will suffer the most."