South Africans are less likely to own NFTs compared to their global counterparts, according to Finder.com’s Global NFT Adoption report.

Finder.com’s survey of more than 28,000 internet users reveals that 8.3% of South Africans own NFTs, which is just below the global average of 11.7%.

This puts South Africa at 12th place out of 20 countries, behind countries like Nigeria, the United Arab Emirates, and Vietnam, but ahead of those like Argentina, Singapore, and Canada. Nigeria, the most populous country in Africa, is also set to receive a large boost to NFT adoption, with a forecasted adoption rate of 35.4% which will keep it as the NFT capital of Africa. 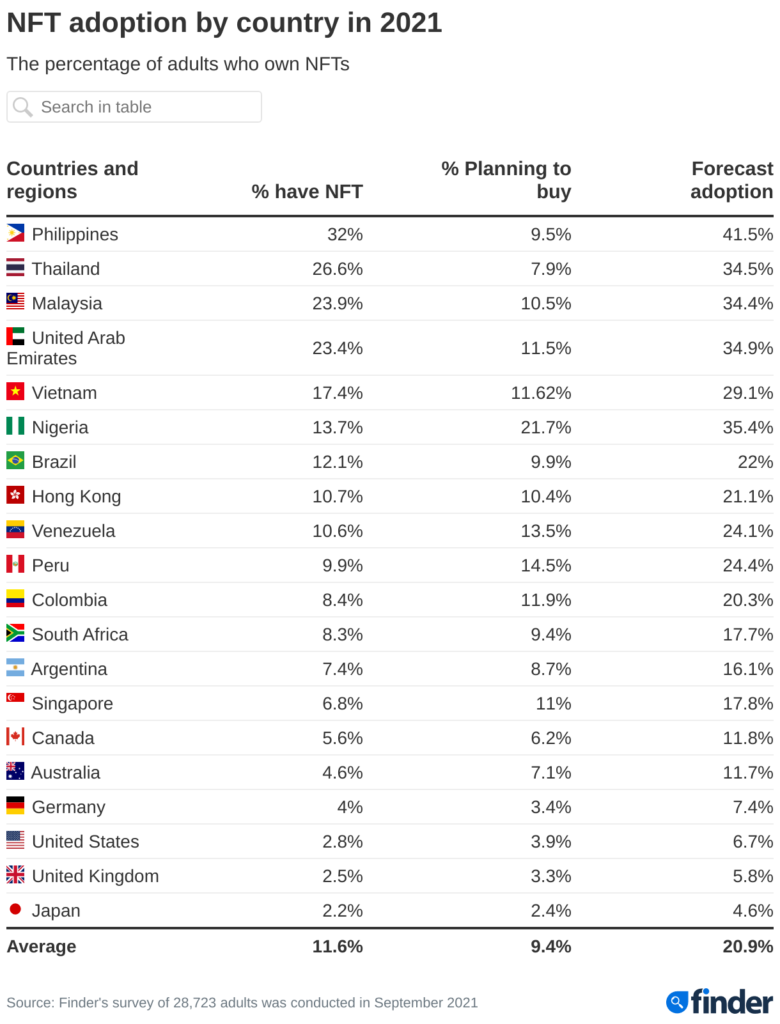 However, an additional 9.4% plan to own NFTs in the future meaning the adoption rate will hit 17.8% and Finder.com’s cryptocurrency editor Keegan Francis says that’s a conservative forecast.

“It’s still very early days for NFTs in South Africa. Just about a third of South Africans currently know what NFTs are and we expect adoption to grow with awareness. Men are currently the biggest adopters, with 10.5% of men saying they own NFTs compared to 6.3% of women,” Francis says.

Francis noted that NFT adoption is much higher in countries that have a lower average wage of working citizens.

“In some of these countries, people are quitting their jobs because they can make money trading NFTs or earning them in games. NFTs can be a great gateway to cryptocurrency ownership, especially because many NFT games don’t require ID,” he adds.

“If you want to buy NFTs directly then you’ll need to set up a wallet, purchase cryptocurrency, and choose an NFT marketplace”.

South Africa has recently seen several high profile NFTs being auctioned, including one which is an image of apartheid struggle legend OR Thambo’s spy pen. A limited line of NFTs was also released by SA Cricketer Dale Steyn. With the customizability of NFTs – where virtually anything can be sold or traded for high value – South Africa’s NFTs space could only possibly become more interesting as museums and other industries seek to join the crypto craze that offers good profits for virtually little to no capital investment.