Namibia all-rounder JJ Smit believes the debutants can continue their fairytale run at the men's T20 World Cup and reach the semi-finals of the tournament.

The African side are the tournament's lowest-ranked side but beat Scotland by four wickets in their first group game on Wednesday, after making the Super 12s at the first attempt.

"If we qualify for the semi-finals of the World Cup, there's going to be a massive uproar in the cricket world," Smit said after Wednesday's historic victory.

"But we know we can. It's possible. We're here in the Super 12s and we're enjoying it."

Left-arm seamer Ruben Trumpelmann took three wickets in the first over of Scotland's innings to get Namibia off to a strong start in Abu Dhabi.

Smit then hit an unbeaten 32 from 23 balls to seal a tense victory for captain Gerhard Erasmus' side with five balls to spare.

The continuation of their remarkable maiden tournament, where they have won three of their four matches - beating Ireland, the Netherlands and Scotland after losing to Sri Lanka, prompted praise from Namibia's president.

"Congratulations for the great win. You showed determination and grit," Dr Hage Geingob said in a post on Twitter.

"I am confident that another win is imminent against Afghanistan. Well done to the entire team!"

On the pitch after the Scotland game, Trumpelmann described the win as "massive" while Erasmus said the team would savour it with "the small group of people here and all the Namibians back home - it's a small but proud country."

Namibia, a large and sparsely populated country with just five cricket pitches, has a population of 2.5 million. 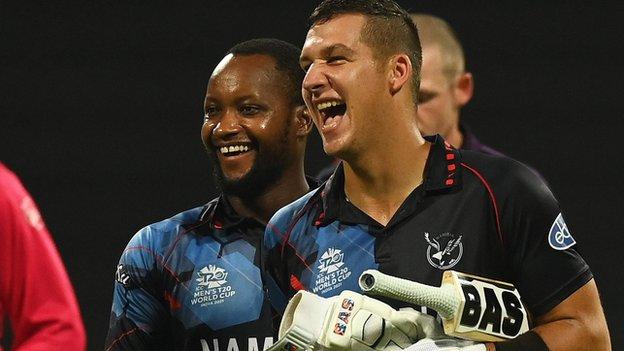 Namibia face Afghanistan, who thrashed Scotland by 130 runs, in their next match on Sunday, with fearsome outings against Pakistan, New Zealand and India to follow.

"For the next game, it's about playing their spin and their seamers well," Smit said. "I don't think we should just focus on their spinners.

"Obviously they have two or three of the best spinners in the world, but their seamers are also highly ranked and come with a bit of pace."

After beating the Netherlands and Ireland in the qualifying rounds to reach the Super 12 phase, Erasmus says the Namibians are relishing the rest of Group 1.

"We are pretty delighted with that performance (against Scotland) but know from here on in we are going to have to lift our level," the 26-year-old said.

"There are some quality sides in our group but we are excited for the challenge.

"We will be taking some good momentum and energy into those games. Hopefully we can execute (our game plan) well on those days."