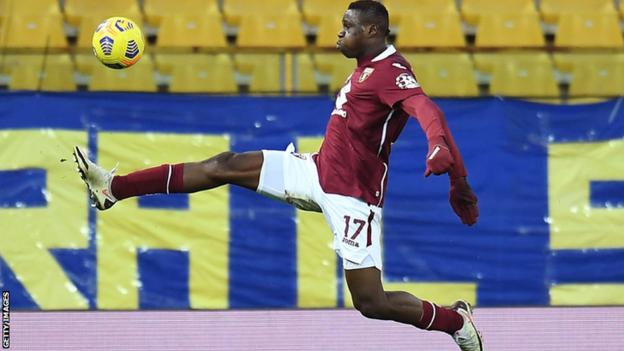 Torino defender Wilfried Singo says playing for Ivory Coast at the Olympics in the men's football tournament is a privilege but also a responsibility.

"It's all about giving a positive image of our country," Singo told BBC Sport Africa. "It's a privilege to represent the Ivory Coast at the Olympic Games - now it's up to us to live up to our fans' expectations.

"I spoke to my club and coach (Ivan) Juric was very understanding about such a positive opportunity for me. I'm sure I will come back stronger from such a top-level tournament.

"We know we have been drawn in a difficult group, but we are determined to go through. We have a team with quality and we want to show that - it won't be easy but it's not impossible."

Singo will be aiming to build on his good performances last season for Torino, who only avoided relegation from Serie A on the last day of the season.

Despite Torino's struggles and being forced to take miss several games due to Covid-19, Singo not only earned a club contract extension until 2024 but also received his first call-up to the senior Ivory Coast team.

"I started off very well, but then the fight to remain in the top flight did worry us a lot," he said.

"I got back in March after Covid and had a few physical issues which slowed me down, but in the end we avoided relegation and I could finish on a high again. Now I am ready for more."

Singo made his debut for Ivory Coast last month as coach Patrice Beaumelle selected him for friendlies against first Burkina Faso and then Ghana.

"I had spoken to (Beaumelle) and he explained to me his project and vision for our national team," Singo explained. "I didn't really expect him to call me up, due to the difficult season that we had just endured.

"It was a pleasure and an honour to represent my country."

As January's Africa Cup of Nations in Cameroon loom ever closer, Singo is well aware of what he needs to do in Tokyo and in Torino to be at a tournament that the Elephants have twice won.

"It will be with determination, concentration, hard work and humility, as well as having a good season with Torino," he added.

"Only these values can allow me to improve. To be recalled to the squad for the big competitions like the Nations Cup and the World Cup, you have to put in good club performances.

"We are going to Cameroon with a lot of determination and desire. We'll do all we can to go as far as possible and I hope all will go well - why shouldn't we return home with a third star on our shirts?"