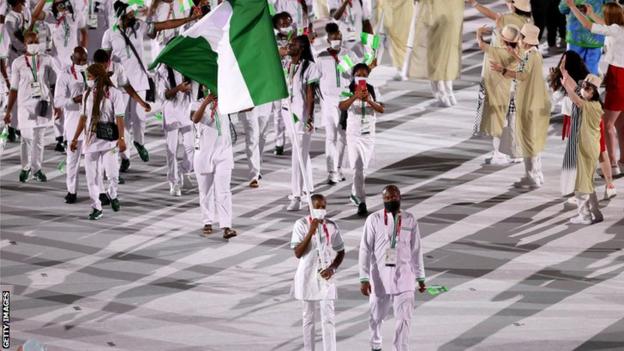 The Athletics Federation of Nigeria (AFN) has taken responsibility after 10 athletes from the country were declared ineligible for the Tokyo Olympics.

The Athletics Integrity Unit (AIU) ruled that the competitors will be unable to take part in Tokyo because of non-compliance with out-of-competition drug testing requirements in the run-up to the Games.

The AIU announced that a total of 20 athletes from the seven countries, including Morocco, Kenya and Ethiopia, regarded as high risk (category A) when it comes to doping have been ruled out, with Nigeria accounting for half of those excluded.

The AIU said: "Nigeria is the most affected country, not meeting the minimum testing requirements under Rule 15 for 10 athletes. Nigeria was included in Category A at the start of 2020 following a continued period of weak domestic testing levels."

With Athletics accounting for 13 of the 25 medals won by Nigeria at all Olympic games, including two of the three gold medals, this latest incident has caused an uproar in the country.

Officials of the AFN and sports ministry have come under intense criticism from some of the affected athletes, local media and disappointed fans who were looking forward to the track and field competition at Tokyo 2020 due to begin on Friday.

But the AFN has sought to calm the storm by taking responsibility for the failings and putting in place 'appropriate measures to comply with Rule 15 of the Anti-Doping Rules of World Athletics'.

"The AFN bears responsibility for any lapses that may have occurred during the process and reassures Nigerians that our performances will not be negatively impacted," the AFN said in a statement.

"All our athletes resident in Nigeria and who qualified for the Olympic Games completed the three mandatory tests.

"Most of our top athletes resident in the USA also completed their tests. However, a few athletes in the American collegiate system were tested, but those tests were deemed not to have complied with WADA sample collection and analysis standards.

"It must be noted that no Nigerian athlete tested positive to prohibited substances.

"The AFN has taken proactive steps to avoid future occurrences by appointing Professor Ken Anugweje as the head of the Medical and Anti- Doping Commission of the Federation."

But 2008 Olympic long jump silver medalist, Blessing Okagbare, who is eligible for the 100 and 200 metres in Tokyo has taken a swipe at the officials for this latest setback.

She has taken to social media to express her disappointment: "The sport system in Nigeria is so flaw and we athletes, are always at the receiving end of the damages.

"They were busy fighting over power, exercising their pride over puma contract/ kits forgetting their major responsibility "THE ATHLETES". It's sad that this cycle keeps repeating its self and some people will come out to say I am arrogant for speaking my truth. It is my career."

Other athletes cleared to participate in Tokyo includes, Ese Brume, who won a bronze medal in women's long jump at the 2019 World Championships in Doha, Tobiloba Amusan who is ranked number four in the 100m hurdles and fast rising sprinter Divine Oduduru.

One of the affected athlete is US-based Ruth Usoro, who won the NCAA championship in the women's triple jump both indoor and outdoor in 2021.

Usoro made the team Nigeria squad, but she and Rosemary Chukwuma, are among the 10 ineligible to participate because of non-compliance with out-of-competition drug testing requirements.

"The bottom line is the Nigeria federation just dropped the ball and didn't test those kids," he said.

"It's just a terrible thing if they don't get to compete because the Nigerian federation never sent anyone to test them. Which will be unfortunate. My goodness."

Another athlete affected by the AIU ruling told the BBC things could have been different if officials had moved faster.

"I feel drained and upset. Travelling here and only to be told you can't compete. I am based in the United States and you know the NCAA don't carry out these testings," said the athlete who prefere to remain anonymous when speaking to BBC Sport Africa.

"They [the AFN] should have followed things up as soon as we made the team to Tokyo and maybe things could've been different. Now all my hopes and dreams are shattered by incompetent officials."