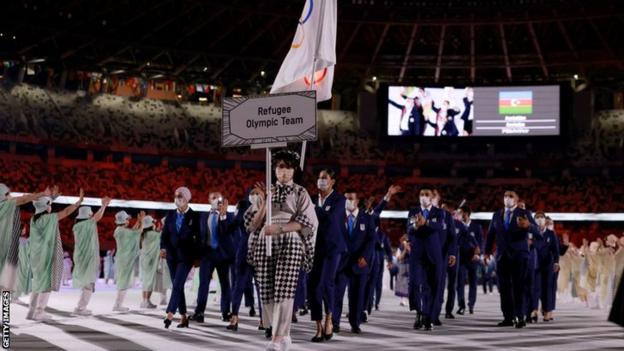 Angelina Lohalith says some of the Refugee Olympic Team were left demoralised ahead of the Tokyo Games after being denied the opportunity to receive the same full Covid-19 vaccination as athletes representing national committees.

The 28-year-old, who was competing at her second Olympics, was talking after she failed to progress from her heats of the 1500m, despite setting a new personal best.

The team completed their entries to Asia just three days before the opening ceremony after their Chef de Mission, former marathon world record holder Tegla Loroupe, tested positive for the virus on the eve of the event.

Lohalith was left concerned for her own safety as she had not been allowed to get a second dose of the Pfizer supply secured by Games organisers, the International Olympic Committee.

"It has been a long journey to get to the Olympics and though it was good we could compete, the experience has left me with mixed feelings," Lohalith, who fled what is now South Sudan for Kenya aged six, told BBC Sport Africa.

"The situation for the refugees, most of the time, is not good; it's challenging. When we were in Kenya, we were not able to get equal rights for being facilitated [for the IOC supply of the vaccine].

"There was an attempt made to join the other athletes and then we were told to 'go back, let us think about you guys because you are a different team'.

"'Because of your status, we will work on the others first and then maybe after, you will have'. That's why we got our vaccine late and we have had only one dose."

Lohalith has been living back at Kakuma refugee camp, Africa's second largest centre for displaced people in a region she describes as unsafe, since the outbreak of the pandemic.

Previously, the Kenya-based members of the Refugee Olympic Team had been largely training alongside the Kenyan national team in Nairobi.

"Sometimes we feel like we are not among the people, we are not men and women like the others," she continued.

"Sometimes we understand that because of our status, we have to let things cool down and maybe to be patient, so they can work things in a different way [but] they don't like to put things together for us refugees like they do for any 'normal' athlete.

"We are not happy about this."

Lohalith admits that when Loroupe, her coach and mentor, tested positive for coronavirus at a pre-games training camp in Qatar she was left feeling concerned.

"When we heard the result we were all losing morale because we know that if one of us is testing positive, what about the rest of the team?" she explained.

"We thought that if one of us is testing positive it may be that maybe the whole team would not participate. That was the worst part, thinking that could happen.

"We hoped that she would recover and also that the rest of the team would test negative because we had really aimed for the competition, we wanted to compete after all the work in the previous five years."

She feels that the Covid-19 pandemic had a real impact on her performance in Tokyo.

"In 2019 I was training so hard for the Olympics. I was in good shape and I could see myself being in contention for a medal but when Covid-19 broke out we had almost a whole year without training," she explained.

The Kenyan National Olympic Commission (KNOC) explained that said meeting the refugee athletes' health needs was not their sole responsibility.

"We included them in our vaccination programme and had our ministry and chief medical officer liaised on the matter," KNOC secretary general Francis Mutuku told BBC Sport Africa.

"We believe [distribution] is a collaborative approach with other agencies involved."

Ann-Sophie Thilo, a press spokesperson for the Refugee Olympic Team, which is steered through a partnership between the IOC and the United Nations Refugee Agency the UNHCR, defended officials.

"The IOC did a massive job working with the host NOCs to make sure all athletes had access if they wanted to get vaccinated and have at least one dose," she explained.

The IOC itself also said that it had made every effort to see as my competitors as possible were vaccinated ahead of the Tokyo Games.

"The Olympic Movement worked in solidarity in a remarkable effort to ensure as many participants as possible could get vaccinated in line with the national vaccination guidelines before they travelled to Japan for the Olympic and Paralympic Games Tokyo 2020," it said added in a statement.

Namibia's 200m Olympic finalist, Beatrice Masilingi, is an anti-discrimination campaigner competing in her first Olympics and agrees that Lohalith has been let down.

"In our country, we were all offered both doses. As long as you are an athlete who's made it to the Olympics, any athlete deserves better than this," Masilingi insisted.