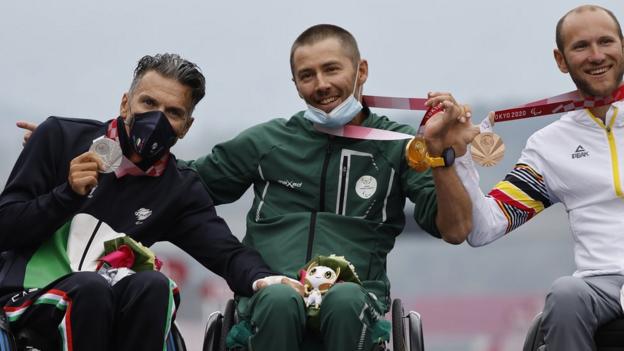 Nearly four decades on since imagining it, South Africa's Pieter du Preez - now 41 - was overcome by emotion as he finally realised his gold medal dream in Tokyo.

After winning the men's H1 road cycling time trial ahead of Italy's Fabrizio Cornegliani and Belgian Maxime Hordes, Du Preez could not contain his joy at the finish.

"It's very special - I was in tears after I crossed the line," he said.

"Tonight I'm going to have an even bigger cry in bed. As a six-year-old I was dreaming about winning gold at the Olympics. Obviously, I hadn't thought I'd be competing in the Paralympics!"

Such aims were radically altered in 2003 when the then 23-year-old, who had qualified as an able-bodied athlete for South Africa in cycling and triathlon, was hit by a car.

"While I was out cycling, I broke my neck in an accident," he said.

The injuries resulted in quadriplegia, with Du Preez spending 42 days, the first 32 of them in an induced coma, in an intensive care unit.

He continued with sport however and despite forging a spectacular medal-laden Para-career, Du Preez had never managed to earn a spot on a Paralympic podium.

"There have been so many tough times and fights to get here that it's difficult to explain," he said.

Had the Paralympics not been delayed, his long-held dream may still have gone unanswered after suffering a bad injury last year.

"I fetched my son from preschool and fell badly," he explained. "I completely dislocated my (Acromioclavicular) joint, snapped my coracoid process off my scapula and had a plate in for six months. I couldn't train properly."

Yet his gold medal caps a remarkable year after he won a fourth road race world title in June.

"There really is something special about 2021 though, and I have now won both the world championship title and Paralympic gold this year," he beamed.

"People won't understand but the condition I was still in [and] the work I had to do to win the world title in the road race was a miracle. Today, to blast my fellow competitors, that was also a miracle."

The gold won by Du Preez, who gave thanks to his wife and four-year-old son, takes South Africa's tally to three, with four in total, enough to make them Africa's second most successful outfit in Tokyo.

Nigeria, which has reaped most of its medals in powerlifting, are Africa's top nation with six medals, three of them gold, while China - the only country with over 100 medals - leads the overall table.