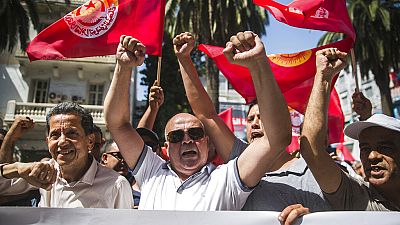 Supporters of the Tunisian General Labor Union (UGTT) gather during a rally outside...   -

The head of Tunisia's powerful trade union centre, the UGTT, on Thursday rejected reforms demanded by the International Monetary Fund (IMF) as a condition for granting a loan to Tunisia.

"We refuse these conditions (of the IMF) because of the low level of wages, the lack of means and the increase in the rate of poverty and unemployment," the secretary general of the Tunisian General Union of Labour (UGTT), Noureddine Taboubi, told the press.

The IMF announced Wednesday in a statement that it was "ready to start negotiations in the coming weeks on the establishment of an aid programme" for Tunisia, conditional on the implementation of reforms.

"The seriousness of the aftermath of the war in Ukraine increases the need to implement ambitious reforms without delay," said Jihad Azour, Director of the Middle East and Central Asia Department at the IMF, after a visit to Tunisia.

To justify the launch of negotiations, Mr Azour observes that the "nationally inspired reform programme, as defended by the government, is more credible and more likely to attract general support, and therefore has a better chance of success than in the past".

However, for Mr Taboubi, the current Tunisian government, appointed by President Kais Saied after his 25 July coup, does not have the "legitimacy" to hold discussions with the IMF on reforms.

On Tuesday, President Saied had called on the IMF, when receiving Mr. Azour, to take into account the social consequences on the Tunisian population of the reforms it demands in exchange for a loan.

Aftermath of missile strikes in east Ukraine's Kramatorsk and on Slovi...

In Pakistan, cows hoisted from rooftop ahead of Eid al-Adha