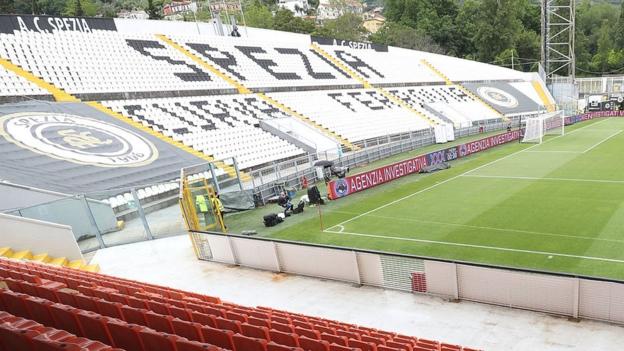 Serie A side Spezia Calcio has been handed a two-year transfer ban by Fifa after having been found to have breached rules governing the international transfer of minors.

Spezia Calcio, who made their Serie A debut last season, illegally brought in 13 players from Nigeria between 2013-2018, BBC Sport Africa understands.

All 13 were under the age of 18 when they first travelled to Italy, which is in contravention of Fifa regulations regarding the movement of minors to foreign countries.

The two-year sanction is the biggest transfer ban ever handed out by Fifa.

Based in La Spezia in the north of Italy, a club that finished 15th in its maiden Serie A campaign will now be unable to buy players until the Italian summer of 2023.

The club breached "Fifa Regulations on the Status and Transfer of Players (RSTP) by bringing several Nigerian minors into Italy using a scheme aimed at circumventing the aforesaid RSTP article as well as national immigration law," said Fifa.

"The Fifa Disciplinary Committee took into account that Spezia Calcio accepted responsibility for its serious regulatory violations, and imposed a registration ban … for four registration periods and a fine of 500,000 Swiss (US$544,000)."

Two amateur clubs based in the region - USD Lavagnese and Valdivara 5 Terre - were also barred for their role in the illegal movement of the minors from Nigeria to Italy.

They received a ban of four transfer windows as well, and received a far smaller sanction of $4,300.

All three clubs have been notified of the decision.