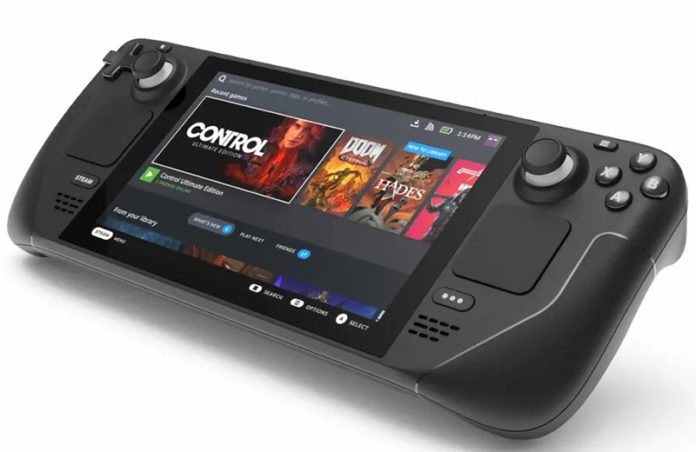 Learn more at https://t.co/ZOTx3KUCVK and reserve yours tomorrow. #SteamDeck pic.twitter.com/jcgbaKfT9c

Said to begin shipping in December, the device will retail at $399, around $49 more than the new Nintendo Switch OLED model. More advanced models of the Steam Deck will be sold at $529 and $649 as well.

The impressive handheld comes with an AMD Accelerated Processing Unit (APU) containing a quad-core ZEN 2 CPU with eight threads and eight compute units’ worth of AMD RDNA 2 graphics. The device ships with 16GB of LPDDR5 RAM.

Three different storage options are available with corresponding models – the first tier at 64GB eMMC storage for $399. The second tier is at 256GB NVMe SSD storage for $529, and 512GB of high-speed NVME SSD storage for $649 for the third, according to The Verge.

Users can also expand the storage capabilities of the device using its high-speed microSD card slot.

Its onboard 40 watt-hour battery “provides several hours of playtime for most games,” Valve says.

“For lighter use cases like game streaming, smaller 2D games, or web browsing, you can expect to get the maximum battery life of approximately 7-8 hours.”

Valve gives an example on battery life, telling IGN that “You can play Portal 2 for four hours on this thing. If you limit it to 30 FPS, you’re going to be playing for 5-6 hours.”

The Steam Deck’s broadness allows for a huge number of control options. There are two thumbsticks, but also two smaller Steam Controller-like trackpads beneath them – these could give more precision controller for shooters.

ABXY buttons and a D-pad are on the front of the device and its 7-inch 1280 x 800 screen is touch compatible for 720p gameplay. The device also has a gyroscope for motion controls, and, like the Switch, comes with two shoulder triggers on each side, as well as four back buttons and built-in microphones.

The Steam Deck runs what Valve calls “a new version of SteamOS”, one which is optimized for the handheld’s mobile form factor. The actual OS is based on Linux, and will use Proton as a compatibility software layer to allow Windows-based games to run without requiring that developers specifically port them for the Steam Deck.

Since the Steam Deck is ultimately a computer running Linux, Valve notes that you’ll be able to plug in a mouse, keyboard, and monitor, and install other game stores, regular PC software, browse the web, and more.

The device has also been made to emulate the regular Steam app on the desktop, complete with chat, notifications, Steam cloud save support, friends and library linked to your account.

For slightly more than you would pay for the Switch, the Steam Deck gives you access to all of your games in the Steam library, including AAA titles that aren’t able to run on the Switch due to its limited hardware and software capabilities.

Right now, the Steam Deck seems too good to be true. If Valve maintains its course with the handheld, it might have a big hit on its hands.